Where Else Can They Go? 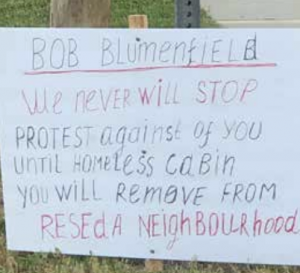 With Judge Carter’s ruling this week that the nearly 5,000 residents of Skid Row must be relocated from the area by October, tensions are running high among anti-homeless  advocates who fear that they will flood their neighborhood, though the skid row clearance should not affect the west valley.

Carter’s ruling emphatically stated that, “The City and County shall prepare a plan that ensures the uplifting and enhancement of Skid Row without involuntarily displacing current residents to other parts of the City or County. Moving forward, the City and County are encouraged to develop a hyper-local approach with community-based organizations throughout each district.”

There are strong objections already to just such local efforts – tiny cabin homes for homeless scheduled to open at Councilman Bob Blumenfield’s office in Reseda.

Signs have been placed near Blumenfield’s residence in Woodland Hills objecting to the project, and several times a week protests gather outside his home yelling their opposition.

“We have already basically been housing the homeless at our office for almost two years with safe parking,” Blumenfield told Valley News Group. “Granted, the safe parking area is less visible than the cabins, but the cabins will have a fence around them and lots of shielding greenery.”

As to the objections from residents and those opposing the cabin community he said, “We wrote neighbors five different letters over six months. Nobody read them. The project was heard in the Reseda Neighborhood Council – and L.A. City Council.  We’re trying to connect folks with information, but we heard nothing until construction started. They are saying they need more time – but they really just want more time to fight us.”

The tiny cabin community will offer transitional housing with social services. There will be 24-hour security and Hope of the Valley, which opened a similar community just today in North Hollywood, will run it.

Ken Craft of Hope of the Valley said of the future Reseda residents, “These people are already in our community.  Most homeless here have ties to the neighborhood – they went to school here, have family here or friends. There is a consistent thread and we want them, when they join the cabin community, to know they’re part of this community, this neighborhood.”

Everything that has been done in the west valley, Blumenfield said, was created from the ground up. “We had to find funding and create projects. We’ve had to build something out of nothing. Our  goal is shelter beds for 100% of the homeless living in the district. But we’re 60% there. Judge Carter helped shake the money from the trees otherwise we’d be stopped in our tracks.   Our job right now is to make sure people who are living there are directly from our streets in the west valley.  Look, the intention of this program is not just to give the homeless a  place to live – but to give the streets and sidewalks back to the city.”