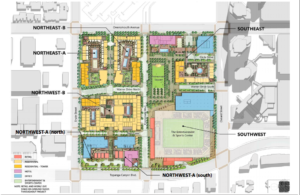 Westfield is appealing the City of Los Angeles Planning Department’s ruling on their Promenade 2035 project.

The city approved the majority of the plan but modified the specifications for the proposed sports/entertainment arena that would sit at the corner of Topanga Canyon Blvd. and Oxnard Street. They required the arena to be enclosed, and reduced the number  of seats from 15,000 to 7,500.

Westfield filed the appeal on August 1.

“The determination that the capacity of the entertainment center be reduced from 15,000 seats, as proposed, to 7,500 seats appears to be based on comments from certain members of the community as to their preferred size and not related to what is permitted and envisioned by the Warner Center Plan or the potential impacts analyzed in the supplemental (environmental impact report),” the appeal said. It further said that the San Fernando Valley was “in need of a venue that would provide high-quality entertainment and could support a venue including 15,000 seats,” the appeal said. “The entertainment center would enhance the built environment by siting an exciting new use in the heart of the San Fernando Valley and provide a function that is beneficial to the surrounding community.”

The appeal also stated Westfield appealed “onerous conditions” imposed on the nature of alcohol sales, additional play areas for children, and the replanting of existing street trees within the development.

At the same time, Gina K. Thornburg, a Woodland Hills resident, vocal member of the Woodland Hills Warner Center Neighborhood Council and founder of Coalition for Valley Neighborhoods, filed a separate appeal. Thornburg’s concerns included that the city didn’t require the developer to build affordable units.  Her appeal stated, “I am aggrieved on behalf of the many people I know, including many millennials, who work full time or more while living with friends or family because the rent in L.A. is so high, they cannot form their own households.” She also cited concerns about air quality, the way a mobility fee was calculated and how Westfield would handle solid waste.

The Planning Department will now consider both appeals.

“We were excited that the decision from the Planning Department accepts the fundamental elements of the Promenade 2035 plan, bringing the project one step closer to final approval,”  Larry Green, Executive Vice President for Development for Unibail-Rodamco-Westfield, told Valley News Group. “With this appeal we are simply refining the plan in accordance with the relevant City process and will continue to work with the City of LA and community to respond to their comments and resolve issues.  We are still in the early stages of this process and, as with any ambitious vision, there are points of negotiation and discussion that will occur.”