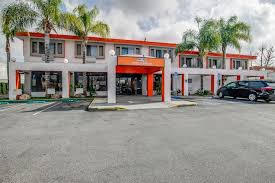 Joined by LA Family Housing at a small celebration under COVID-19 protocols, Councilmember Bob Blumenfield has announced that the City of Los Angeles has purchased two hotels for unhoused Angelenos in his district.  These are the first two hotels in Los Angeles that will transition from being temporarily leased sites in Project Roomkey to permanent sites as part of Project Homekey.

“With the temporary nature of Project Roomkey, I wanted to make sure that no one who entered the program in the West Valley experienced gaps in service or returned to the street. Today we’ve been able to make that goal a reality and have these buildings forever,” said Blumenfield. “The only way we will be able to solve the homelessness emergency is by continuing to invest in diverse housing options with services.”

These hotels will help local unsheltered people get into stable housing. With the purchase of the Howard Johnson in Reseda (75 rooms) and the Super 8 in Canoga Park (52 rooms), these sites will serve formerly homeless people on a permanent basis. The Howard Johnson will continue to be transitional housing with residents relocated as appropriate housing is found and more permanent supportive housing is built. The Super 8 will be converted to permanent housing with the installation of kitchenettes in each room, while serving as an interim housing facility for now.

Purchased by the Housing Authority of the City of Los Angeles (HACLA) and transferred to LA Family Housing (LAFH) to own and operate, these acquisitions are the result of the successful partnership between the City and State to bring unsheltered residents indoors and prevent the vulnerable from exposure to COVID-19. The purchase of the two hotels was done with the State of California Homekey Program and CARES Act funding approved by the City Council.

“Project Homekey is allowing us to quickly expand available interim and permanent housing in the City of LA and is an example of solution-oriented leadership,” said Douglas Guthrie, Chief Executive Officer of HACLA. “We are so pleased to have a long-term stake in this community with our project in partnership with LA Family Housing and want to acknowledge that none of this would be possible without cooperative leadership at the State and local level, including City leaders like Councilmember Blumenfield.”

Project Roomkey has been a collaborative effort between multiple levels of government and the Los Angeles Homeless Services Authority (LAHSA) to swiftly provide local unhoused people with rooms, and supportive services, throughout the COVID-19 pandemic. As LAHSA has been closing down some hotels and finding other living assistance for the formerly homeless, Blumenfield fought to ensure that the two Roomkey sites in his district were formally purchased to create new, permanent housing opportunities for the West Valley’s homeless.

To celebrate the occasion, Blumenfield joined Stephanie Klasky Gamer, CEO of LA Family Housing, and a formerly homeless resident named Michael to hand over a ceremonial key and drop off care packages comprised of reusable masks and personal hand sanitizers for each of the residents.

“We are incredibly grateful for the State and City’s efforts to end homelessness in people’s lives and greatly appreciate the opportunity to house more Angelenos through Project Homekey,” said Stephanie Klasky-Gamer. “We are in unprecedented times. With far too many Angelenos without work, facing dwindling unemployment benefits, and rents they can no longer afford, the already staggering rate of homelessness in our city will without question increase. Through Project Homekey, LA Family Housing is poised to meet the growing need for safe and stable interim and permanent supportive housing for our city’s most vulnerable residents.”

Blumenfield has been pushing to create many other West Valley homeless projects in his district that currently are in the works or expanding. In January 2021, the 80-bed Bridge Housing facility will open in Canoga Park and two Cabin Communities with 125 tiny homes are projected to open in March/April. He is also expanding Safe Parking lots in the district and helping shepherd permanent supportive housing and other developments. Additionally, he secured $450,000 to grow the capacity for the drug addiction and mental health program for unhoused people that he started with Providence-Cedars Medical Center and Tarzana Treatment Center.

Tags:#homelesshousing#homeless#blumenfield#valley
previousLocal Hospitals Get First Doses of Vaccine
nextNighttrek: What to See in the January Sky

A free community town hall meeting will be held on 10/6 from 6:30 to 8:30 pm at St. Mel School's O'Connor Center to discuss the dangers of #Fentanyl. The #LAPD will facilitate the discussion on "Fentanyl and the L.A. Overdose Epidemic."