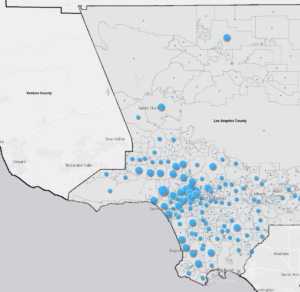 Just click on your city and see how many cases of coronavirus have been confirmed.

Using data from Johns Hopkin’s website, Graves and his students used geographic information system software to create the map because maps found online “didn’t really give me  a sense of what was happening in my community at  the county level.”  He told Valley News Group, “I live locally and wanted to show what was going on locally.”

Graves, a geography professor,  and his team are part of the Center for Geospatial Science and Technology at CSUN. The center is a group of teachers and former students who work full time to make maps and do analysis. It’s basically the research and contract wing of the geography department  that has done health and medical geography studies in the valley as well.

“We’ve compared disparities from the east and west valley. Where toxic waste dumps are and asthma statistics for example,” Graves said.

“This is not a radical departure for us,” he said, about creating a map using statistics, “but it’s a crisis and it took a  bit to figure out how to pull data from Johns Hopkins and LA Public Health and integrate it.”

“Places that have population density, a lot of tourism and international airports – places like New York, Los Angeles and San Francisco –  are going to have high rates of the virus,” he continued. But some other places have far more cases than you would expect, given their characteristics. I think that’s important to see.”

By tracking the coronavirus’ progress by county, Graves is hoping the data will raise red flags in some areas, and identify other areas where it appears efforts to fight the virus’ spread are working. “We can learn from those places where the numbers appear to grow at a slower rate and share with those places that appear vulnerable,” he said.

“Right now, we have to take all of this with a grain of salt,” he continued. “We don’t really know how good the data tracking those with the coronavirus is. Everyone is doing the best they can. But once the rate at which people are being tested improves, then we will have a better picture of what is going on. Right now, our maps are creating a foundation on which we will eventually create a better picture of what is going on in the country, county by county.”

Graves said that even with all the analysis, the map was really created “largely for public consumption. The idea was to make it available to anybody.”

He added, “At CSUN we’re ahead of the curve on this – we really try here to give back to the public.”