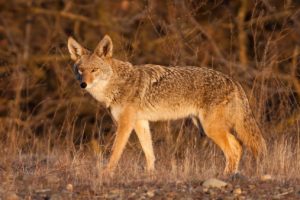 It was Sparky’s nighttime  constitutional. My friend Sandra Mariscal carried him out the front door to the walkway, being extra cautious as there had been coyote attacks on her other dog in the last few months. Just 10 feet from the  front door of her Vista de Oro home, a coyote sprang out of the darkness and knocked her over, grabbing Sparky as she fell backwards.

“He was waiting for me,” Marsical told Valley News Group. “The coyotes know we have small dogs here and he lay in wait.”

She was able to scramble up and scream at the coyote, which dropped the dog as he scaled the fence.

This would be the coyote’s fourth attack on dogs at the house, but the first on a human. Mariscal injured her hip and wrist, which had just recovered from carpal tunnel surgery. Sparky was much more chewed up, requiring an immediate late-night visit to the vet.

The attack happened on Friday night. Saturday morning I called the California Department of Fish and Wildlife and Los Angeles Animal Control, leaving a message that a coyote had actually gone after a human this time. I did not get a response until Monday morning (evidently most animals don’t attack on weekends).

The Fish and Wildlife representative explained that unless the coyote had actually bitten a person, there was nothing they could do except give the homeowner information on how to keep coyotes out of their yard – leave no food out, clear brush, etc. I explained they had done all that and more, installing sensor lights, carrying an air rifle, even resorting to a pellet gun when they saw a coyote – often times at 2 or 3 in the afternoon, just sitting out in the yard, waiting.

I pressed for another answer, and Wildlife Biologist Rebecca Barbossa called me back the next day.   She explained that Fish and Wildlife were not mandated to manage coyotes. They were, however, mandated to handle mountain lions, bobcats, bighorn sheep, raccoons and deer. I asked her how many deer attacks there had been this year.

She ignored my obvious sarcasm and stated that, “The Department of Fish and wildlife has never provided a removal service. The coyote is a non-game animal.”

I wasn’t sure why a raccoon was, but proceeded to ask her what they could do. Turns out they have instituted a program called “Wildlife Watch,” which like Neighborhood Watch is designed to alert neighborhoods and coach city officials in coyote management. It’s basically a program to educate homeowners on how to repel coyotes. So we were back to square one.

Next I tried Los Angeles Animal Control. They were no better. Actually, before 1994 the Department of Animal Services did routinely trap and euthanize coyotes. Their website states that stopped with a “change in thinking. The source of the problem is not the presence of wildlife, it is the environment that humans provide for them just by the simple manner in how we are the provider of food, water and cover for them. Many people are encouraging wild animals to live near their homes.”

I stressed to Animal Control’s Officer Hooks that a human being was hurt this time. Not an issue, they said. However… if an animal is injured, animal control will come out and address that. So if a coyote or bobcat is hurt, they will respond.

I asked point blank, “What if a coyote is acting aggressively and poised to attack?” Her answer, “We’ll come out and scare it away.”

Urban coyotes are an increasing problem in the valley, even more so with a pandemic when there is less human activity. Even with that, and ever more reported attacks on animals and humans, Los Angles doesn’t have a coyote management plan.

Other cities such as Torrance and others in Orange County do – which include tracking and eventually trapping aggressive animals.

Animal Control’s policy continues to be education of homeowners about “hazing” coyotes – shouting, arm waving and noise making at urban coyotes to get them to change their behavior and avoid residential neighborhoods.

But according to a  University of California Agriculture and Natural Resources Study in 2020, there is little scientific evidence to support hazing as an effective management tool. In fact, says study author Niamh M. Quinn, the method has failed to work in other wildlife situations including those with bears and birds.

So what to do? Mariscal ended up hiring a private trapping service that is licensed to trap and euthanize coyotes. They have set out two traps in the yard, baited with dead chickens, at a cost of $200 each for the trapping. If they do catch a coyote, it is another $175 to remove and euthanize it.

At press date, no capture.

Mariscal said wryly, “They know we’re onto them.” Still terrified, she now plans to build a chain-link fenced enclosed just outside the back door so the animals can do their business and they – and she, are safe.

For more info on how to scare off animals,  Los Angeles Animal Services is holding an online seminar March 23. Visit laanimalservices.com.

The previous content has been removed due to copyright infringement.

Tags:#urbancoyote#coyoteattacks#dogattack#departmentofwildlife
previousGoing Hungry in the Valley
nextIs Street Racing Out of Control?