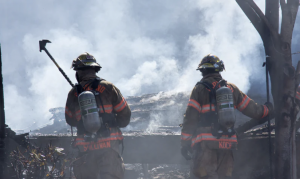 Fire season in California was always defined as June to late December.

This May has already seen two red-flag alerts – an anomaly which hasn’t happened in May for almost 10 years. A red-flag warning is a forecast issued by the National Weather Service that conditions are ideal for wildfire – with a combination of strong winds, low relative humidity, dry fuels for wildland fire combustion and rapid spread.

Due to historically dry conditions and summer temperatures predicted to be above normal, California residents once again face the threat of extreme wildfires this year, according to a forecast by Accuweather, a leading U.S. meteorological service.

The recent Palisades Fire which started last Friday, though set by an arsonist,  spread rapidly through the dry brush of Topanga Canyon, and was just 66% contained as of Thursday.

Fire season in California is now year ‘round, according to Thom Porter, Cal Fire’s state Fire Chief. “Every single acre in California can and will burn someday, and it just depends on what day that’s going to be, where it’s going to be, and whether you’re in its sights. Be prepared.” Porter said.

This date, 13,604 acres have burned in California this year, nearly eight times the burned acres recorded at the same time last year. California is still in the midst of a statewide drought and has seen a two-year rain deficit.

“Places that normally don’t burn or don’t burn well, because of the drought have the potential to burn this year. There’s no place in California really anymore that is immune to wildfire,” said Brian Rhodes of the U.S. Forest Services. “Wildfires aren’t a matter of if, but a matter of when.”

In Southern California, Firebreak Protection Systems, Inc., is on a 24/7 watch for wildfires.   Firebreak is a private firefighting company employed by insurance companies to add an extra layer of protection to their clients during a major wildfire.

Firebreak is highly recommending that all homeowners, who live in high risk areas, to know and follow the ‘Ready, Set, Go’ plan put together by fire departments.

Make sure you have adequate brush clearance around your home, and that you are prepared to leave immediately if evacuation orders are given, and to do so when ordered to evacuate. Residents should prepare by signing up for emergency alerts, knowing evacuation routes, having a go-bag and respirator mask on hand, and readying an inside space where you can deploy an air cleaner or filter.

Firebreak’s Eddie Hosch recommends the following actions if you are notified a wildfire is nearby:

• Close garage windows and doors, but leave them unlocked

• Confine pets to one room

• When advised to evacuate, do so immediately

• Follow the evacuation route your local officials have identified.

Tags:#fireseason#wildfire#firefighters#palisadesfire#evacuation#fireprevention#californiafires
previousFinding Those He Thought Were Lost
nextSaving the Smallest House in Woodland Hills