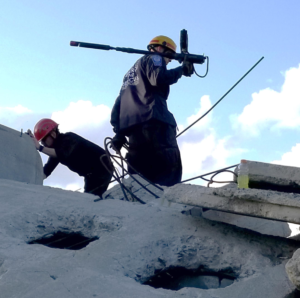 Tap…tap…tap…tap.   Five minutes ago, you were doing paperwork or talking on the phone in your secure office building in Haiti, and then in the next 30 seconds, after a monster earthquake, you are buried.

You are alive and breathing, but unable to move, sandwiched between the concrete floors of your building. After hours of screaming, your voice goes hoarse, then silent to rescuers above.

After not hours, but now five days of desperate banging on your concrete sarcophagus to get their attention, your hands are bleeding and raw to the bone. All you can do is tap…

Recently, Los Angeles Fire Department Station 88 on Sepulveda Boulevard, which is also the largest FEMA disaster training facility on the West Coast, hosted elite FEMA Search & Rescue teams from across the United States and around the world to test, train and become certified on the next-generation of sensors, listening devices, cameras and GPS-mapping technology of victims in collapsed-building scenarios.

The training included equipment which can hear the faint tap of a human finger on a slab of concrete, and then core through layers of concrete with an articulating-tipped camera designed to illuminate, search, locate and with a built-in speaker and microphone, communicate with survivors, until the heavy equipment can arrive to extract them.

In the abovementioned case of the 2010 Haiti earthquake, that one victim, after five days of screaming, banging and crying for help, was able to contort his body to remove his shoes and use the harder-than-human-flesh heels to create a little more noise for the heroes above. Tap…tap…tap…tap.

But this time, an American first-responder with Virginia Task Force 2 Urban Search & Rescue, who I had the pleasure of meeting, deployed within hours of the ‘quake had the right equipment. He heard the faint tap, tap, tap. After five days of being buried in the rubble, with hope waning, the victim became a survivor, and was pulled out by our American firefighters with that superior equipment and the drive to save lives.

But that was then. This is now. The equipment being trained upon our invited visit to the facility was far more sensitive and precise, and the goal of the training exercises was to ensure that when there is a disaster with a multi-agency response, all teams are speaking the same technical language which is vital.

In attendance were the best-of-the-best Urban Search & Rescue (USAR) teams from New York City, Miami-Dade, Texas, South Florida, Sacramento, as well as from Iceland and the UK. The ladies and gentlemen of these teams were infinitely smart, serious, matter-of-fact, intense, and at the same time, sweet, kind, sharing of their wisdom and down to earth and wonderful. It was a true joy to spend time with these people who risk their lives to save us.

California Task Force One, located at LAFD Station 88 is one of 28 FEMA Urban Search & Rescue teams across the country who respond to disasters no matter where they occur.

These teams are ready to go in a moment’s notice with all the technology, heavy equipment, swift boats and flood rescue equipment loaded in trailers and ready for deployment. LAFD Captain Mike Kamerer, who leads CA TF-1 was our gracious (and handsome) host and offered stories and insight and introductions to these fine men and women.

We all thank the hard work, dedication and sacrifice these heroes make for us every day. Thank you, Captain Kamerer and LAFD Station 88 for your warm hospitality.

Paul Scrivano is the owner of Blue Dog Beer Tavern who loves and supports first responders and military. While he’s always wearing a LAFD shirt, he is not a firefighter, he is a firefighter feeder

Tags:#LAPD#FEMA#Station88#ShermanOaks#USAR
previousWhat to See in the June Sky
nextEnough of Civil Liberties, Do Something With the Homeless