Take Him out to the Ball Game! 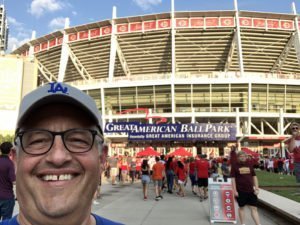 There are 30 stadiums used by teams in Major League Baseball. Fred Gaines has been to them all, and more.

At the beginning of the 2019 baseball season Fred was seven stadiums away from his goal of having seen a game played in all 30 stadiums.  A few weeks ago he saw a Mariners game in their home stadium in Seattle, completing his quest.

It has taken a lifetime of traversing the country to fulfill the dream.  In reality, he has already been to more than 30 stadiums.  Several of the current teams play in new stadiums and/or different cities.  So Fred has had to return to those cities to see a game in the new stadium or add a new city.  In the 2020 season the Texas Rangers get a new stadium, so Fred’s quest will continue.

Growing up in North Hollywood, Fred attended Dodger games, sitting in the season ticket seats his father had at the time.  Fred still has those season ticket seats and regularly attends the games.  In fact, Fred will be in the seats as the team begins its quest for the World Series title this week.  As a kid, he also attended games in San Diego and San Francisco – beginning of a lifelong love of baseball and stadiums.  He has even been to Vero Beach when the Dodgers used to have Spring Training there.

Visiting all those different stadiums comes with rituals.  Fred has a hot dog and a beer at each, plus something from the menu particular to that stadium.  In Washington, DC it’s the chili, while in Cincinnati it is the ice cream.  Camden Yards has great barbeque and in San Francisco you can eat a shrimp cocktail in the upper decks while watching the boats in the bay.

The stadiums all have something special to them.  Yankee and Dodger Stadiums are palaces to baseball.  Wrigley Field and Fenway Park are like stepping back into history.  Perhaps the best part of visiting all the stadiums is the opportunity to see the different parts of the country and meet people from all over. One of the things you see in many cities is ball parks that are located in downtown areas.  People take public transportation or walk to the stadium in groups.  It creates a camaraderie that you don’t get at the baseball stadiums in Southern California.

Congratulations Fred on achieving your goal of visiting all the major league stadiums.  See you in Texas next Spring for a game in the new stadium.

Laura Levinsky is a freelance writer based in Woodland Hills.

Tags:#fredgaines#baseball#record#dodgers
previousNighttrek: What to See in the October Sky
nextGrassroots Petition Started to Save Jim’s BBQ