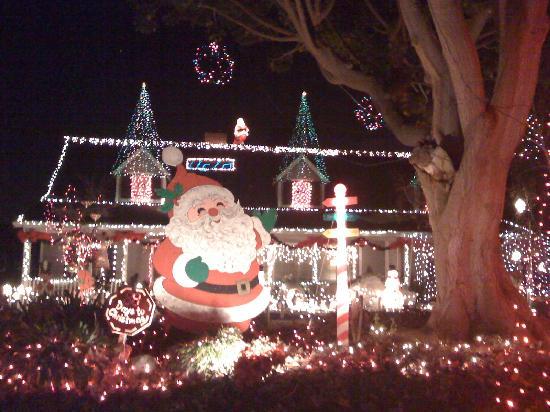 It was the brainchild of just two women meeting for a “coffee klatch.” The year was 1950, and Mooie Harrington and June Ashen  lived on Lubao Avenue in Woodland Hills and decided to “spruce up the neighborhood for the holidays.”

Ashen was the first resident on Lubao, moving there in 1948. Harrington was third – her husband built their house in 1949.

As the neighborhood grew the two friends corralled other neighbors to simply decorate their mailboxes as candy canes. But soon the whole block got in on the project and a local plumber donated tin stove pipe to make actual candy canes, which  were painted white and then wrapped with red tape.

Eventually, their husbands got involved, and brought out skill saws and electrical cords and started adding to the decorations.

Mooie recalled that every year, “we added something new, but there was always Jesus, Mary and Joseph.”

“We started planning on Halloween,” she recalled, “but wouldn’t actually start decorating until the day after Thanksgiving.”

Lubao was “Candy Cane Lane,” nearby Penfield was “Choir Lane,” Oakdale was “Candelabra Lane” and Jumilla became “Avenue of the Bells.” But the whole neighborhood today is still known as “Candy Cane Lane,” and now attracts thousands of visitors each year to drive up and down the streets to admire the decorations, which have gotten grander and more elaborate in last 60-some years.

“We thought it was elaborate then – with 150 extension cords and 450 lights,” laughed Mooie. She never dreamed that it would become as big as it did.  The homemade sign that said “Candy Cane Lane” where Lubao met Ventura Blvd. before the freeway was built is long gone,  as are the reindeer that jumped from Mooie’s yard over the fence to June’s, but the spirit of Mooie and Ashen’s dream to bring the community together for good cheer at the holidays season still lives on.

Candy Cane Lane can be accessed from Winnetka Avenue and Oxnard Street beginning the second Saturday in December.