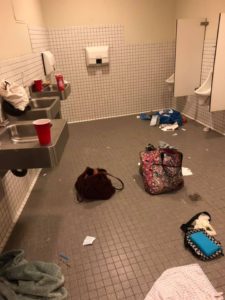 The LAPD Narcotics Unit made a drug bust and cleared out a homeless encampment Sunday in the bathroom at Warner Park . According to LAPD they found 10 persons loitering in and around the bathrooms, which are located to the east side of the concert stage. They found seven loaded syringes of meth and heroin, three meth pipes and a multitude of drug paraphernalia, trash, beddings, clothing and shopping carts. Eight individuals were arrested and cited for narcotic related offenses and trespassing. According to the police, the inclement weather forces those on the streets to find shelter, but these individuals also found a place to do drugs. The bathrooms were immediately secured until the hazardous conditions could be cleaned up and all detritus removed.

Nora Ross, CEO of the Valley Cultural Foundation which presents the free concerts in the park every summer on the stage,  spoke with a representative  at Recs and Parks  about the situation. Together both parties will be working very hard to assure that the park and especially the restrooms will be clean and clear for concert season.

“Working with the LAPD Topanga Station and Senior Lead Officer Sean Dinse  we will begin to work on a plan and program to assure all concert patrons enjoy the events each week at the park. We know this is a serious situation and must work together to provide a safe environment for our park attendees all the time.   We appreciate all the efforts of LAPD to  keep the park safe and clean,” said Ross.