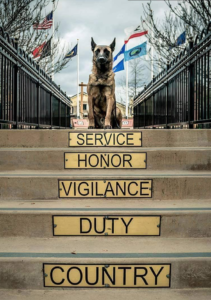 While we’re all familiar with the saying that dog is man’s best friend, at Shelter to Soldier, man and dog are more than friends; they’re each other’s saviors. Every 69 minutes, a United States veteran commits suicide and every day 3,200 dogs are euthanized in shelters nationwide. These statistics, while incredibly shocking, are seemingly overlooked in the grand scheme of nationwide issues. Co-founder of Shelter to Soldier, Graham Bloem, and his dedicated pack, are looking to change those numbers.

Bloem, an Animal Behavior College Certified Dog Trainer (ABCDT), started his career in the animal industry and turned to dog training to solidify his affinity for working with animals. As a trainer of 18 years, Bloem mostly worked with pets and volunteered his spare time to aid in the training of dogs who had returned from war zones as their Marine owners were looking for help in reintroducing them back into everyday life. It wasn’t until the suicide of his civilian friend that Bloem then took a closer look at the complexities of mental health. Reeling from the statistics, and discovering that funding had been cut for service dogs, Bloem’s idea for Shelter to Soldier was born.

Knowing the unconditional love that pet dogs provide to their humans and the number of veterans and shelter dogs that needed a helping hand, Bloem decided to become a matchmaker. In 2012, Shelter to Soldier officially became a CA 501c3 non profit organization with the goal of adopting abandoned dogs and training them to become psychiatric service dogs for post- 9/11 combat veterans suffering from Post Traumatic Stress Disorder, Traumatic Brain Injury and other psychological injuries associated with their service experiences. While no small feat, Bloem was determined to use his background expertise to make a life changing difference.

After all, dogs in shelters are often overlooked for behavior issues that could easily be trained if someone only gave them the chance and the time to work with them. Shelter to Soldier’s professional dog trainers regularly visit local shelters to “dog shop” and find the animals that show the possibility of being rehomed with a veteran. With a detailed checklist of criteria (four months to a year old, 40-60 pounds, no major behavioral or medical issues that are irreversible), this is perhaps one of the most fun parts of the job, knowing you’re one step closer to helping a situation turn around.

Then comes the aforementioned matchmaking portion. After all, each veteran is unique in his or her specific needs and the dogs are custom tailored for tasks that are appropriate to their handler. Whether psychological, physical or a combination of both, dogs are evaluated with how best they can fill that niche.

While the dogs are already obedience trained, they still go through a four-to-six month training period with their handler, truly getting to know each other’s needs. The dog learns the tasks they will utilize as a service dog and the handler is able to bond with the animal while simultaneously learning the service laws that they will need moving forward. The results are in all sense of the word, life changing. “I was having some gnarly nightmares and having Griffin there to pull me back into reality after I woke was a game changer,” says US Army Ret. Mason Crosslin.

To date, Shelter to Soldier has successfully matched 23 pairs with another four connections aiming to be finalized by this spring. While Bloem is no doubt immensely proud of the success of the organization, it only takes a small glance at the testimonials to truly see how impactful this organization is on its participants. U.S. Navy Ret Vic Martin testifies, “There is a distinct difference in my life from where I was without Shelter to Soldier and my service dog to where I am now with their support and help. I have seen the power of our service dogs. I have seen them change the perspective of the hopeless into a driven leader devoted to help others.”

The organization’s reputation is so well known that veterans are willing to make the hours long round-trip to the shelter’s home base in San Diego to participate in the program and Bloem has constant calls about dogs in need of rescuing. It’s Bloem’s hope to expand into the Los Angeles area, which may soon become a reality as they just finalized a major sponsorship with the LA Rams. After all, with no intention of slowing down, Shelter to Soldier is solely supported by private and public donations to aid in the $15,000 cost of the dog’s journey though the program from adoption, housing, medical and food to continuous training of the dogs.

While donations are accepted in all manner of ways, those interested in helping out locally can visit Encino’s own Three Dog Bakery which works in partnership with the organization. This canine centric business, specializing in custom dog treats, was introduced to Shelter by a local Encino resident Rennie Gabriel and as fellow dog lovers, quickly jumped on board. Through donations from the store and various community events the bakery holds, Three Dog Bakery has even been able to sponsor their own dog, Thistle, who has joined the program to be matched with a veteran. Furthermore, their annual Easter B’Egg hunt for pups on April 20 at Lake Balboa will see registration and ticket fees donated to Shelter to Soldier.

It’s the small acts that make the biggest difference and Shelter to Soldier turns an uncertain future into one of safety and security. It’s been well documented that service dogs can make a significant impact on the mental health of veterans and by rescuing dogs from shelters where they would otherwise be euthanized, Shelter to Soldier can proudly claim that with their tireless efforts, they’re saving lives two at a time.

If you are interested in contributing to this great cause, visit sheltertosoldier.org, or call 855-287-8659 for a confidential interview regarding veteran eligibility.

Tags:#happynews#sheltertosoldier#encino#threedogsbakery
previousAnswering the “Call” to Serve and Protect
next52,00 Rats Bought By City