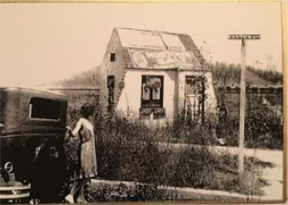 The tiny, 100-year-old house at Ventura Boulevard and Glade has withstood nearly a century of weather, various tenants, earthquakes and more, but is succumbing daily this year to the ravages of a homeless encampment.

The house dates from the early 1920’s, and is, according to county records, a scant 192 square feet.

It sits on a lot that runs down Glade for about 2,900 square feet, that at various times has hosted Storybrook landscape Center, an antique store called Dove Creek and a high tea house called The Cottage.

The cottage itself has a storied past. According to one previous tenant, she actually met a man who grew up in the cottage during the 1920’s. According to him there was no bathroom, and he and his brother slept in the rafters.  His single mother, he related, “entertained” the men at the  bar at Topanga and Ventura. This story may have engendered the rumor that the building was once a house of ill-repute, which was hotly denied by another former tenant.

Whatever its origins, the house is still standing, for the moment, after 100 years.

There has been a concentrated push from many residents, decrying the decay of the property on Facebook, to have it designated a historic site because of its age.

According to the L.A. City Planning Department, one determination if a structure should be designated historical is if it faces any threats. The current homeless camp occupying the building is slowly and systematically destroying the structure.

According to Councilman Bob Blumenfield’s office, police and city homeless advocates have visited the property several times. The homeless were evicted, but then returned to take up residence.

A recent property search still records the owners as the Keyes family. They reportedly sold the building but the new owners have not yet been recorded or been able to be contacted.

Blumenfield’s office was made aware of the growing impetus to maintain the property and get it a historic designation.   Efforts are ongoing to contact the owners and also to evict the homeless before they completely take apart the small house.

Anyone with information on current ownership of the property can contact the publisher of this paper  Kathleen Sterling at valleynewsgroup@gmail.com. Valley News Group will continue to update the effort.

Tags:#cornercottage#woodlandhills#blumenfield#tinyhouse#glade#homelessencampment#cottage
previousThere’s No More “Fire Season” in California
nextFireworks to Light Up West Valley Skies for the Fourth of July!