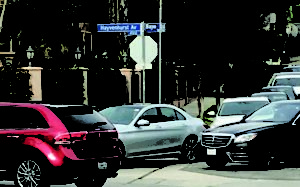 “The streets of Encino used to be a secret,” says LAPD’s Tim Walia.

“There were always those who knew the back way to make the trek over the hill from Ventura Boulevard to the westside. But now, with all the different apps, every smart car gives you directions using residential streets to avoid the 405.”

It’s one of the biggest com-plaints the Senior Lead Officer hears from residents. The streets south of Ventura Boulevard are clogged with Westside commuters every morning, using Waze and Google Maps to get them to work.

The City of Los Angeles, without a doubt, is a city of cars. Commuting to work, running errands, getting to the airport or simply needing to travel from point A to B, our cars seem to serve as our second homes for as much as we are in them.

With the ever-dominant dependence on our vehicles, naturally comes the influx of traffic…and the need to avoid it. Whether it be Waze or the navigation systems built directly into cars, drivers are constantly looking for ways to shave as much time off their commute as possible. Unfortunately, while theses apps serve to direct drivers to the fastest route possible, they subsequently prove detrimental to those who had no say in the matter – neighborhood residents.

Each of these navigation apps use a variety of real-time tools to gauge the best route possible for drivers, taking into consideration traffic, accidents and even weather to provide the most efficient route to the destination. Utilizing all these variables, the app inevitably directs drivers to previously unknown shortcuts, many of which pass through quiet neighborhoods and residential streets.

As these shortcuts become increasingly popular, local side streets south of the boulevard have become inundated with drivers, who, prior to these apps, had never routinely ventured down these streets.

“Once the app tells them a shortcut, they remember it and use it on a regular basis,” said Walia. “So new ‘wazers’ quickly become regulars on Hayvenhurst and other Encino streets that lead to Mulholland and beyond.”

Local residents continue to be displaced by commuters who use these routes to shave a few minutes off their drive. One resident reported it takes him almost 20 minutes to back out of his own driveway.

Complaints are many, solutions are few.

LAPD has no control over the commuters unless they run a red light, violate traffic rules or break the law. The Los Angeles City Council has even addressed the issue, but Waze and other navigation apps are private enterprises beyond their jurisdiction. “All we can do is make sure they obey the rules of the road,” said Walia. “But unfortunately these are public roads.”

Has Waze affected your street or neighborhood? We welcome your comments and suggestions on how residential traffic has impacted your daily routine. Email them to encinoenterprise@gmail.com or tweet us your reaction to this story @ ValleyNewsGroup.