One Man’s Crusade to Save Lives 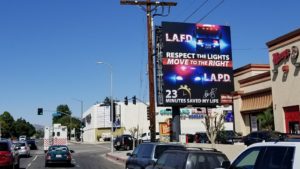 He was tired, but chalked it up to riding herd on one restaurant and opening another.

He worked a long day, then showed vendors the progress at the new restaurant in Little Ethiopia on Fairfax south of Olympic.  “I was just beat and felt suddenly very nauseous,” he said. “And told everyone to go on home because I wanted to be left alone to throw up in peace, thinking I was merely relapsing a recent flu.”

“I started feeling dizzy, and then, without warning, lost my ability to stand up. I sat down on the back door threshold, about to close the door on those around me, but instinctively said, ‘I think you should call 911.’”

Five minutes later, paramedics from LAFD Station 58 showed up. In the ambulance Paramedic Evan Brooks told his victim, “Paul, your pulse is down to 20, I need you to hang on.”

“Although I still felt no clutching pain or pressure, when Brooks told me to ‘hang on’ I knew I was dying,” Scrivano recalls.

In a scant five minutes, Brooks and Paramedic Michael Thompson, who drove like a combination of a Formula 1 and off-road racer, had him at Cedars Sinai, and after a brief three minute visit to the E.R., was rushed up to the Catheter Lab and received an angioplasty and two life-saving, artery opening stents.

In a miracle which Scrivano still cant quite explain, he was breathed new life into a body nearly depleted of its previous life. And all this happened in only 23 minutes.  Scrivano repeats, with emphasis, “From the 911 call to the placement of two stents in my heart was ONLY 23 MINUTES!” How does he know exactly?  “I never lost consciousness through the entire event and had my phone in my hand all the way to the recovery room. I actually had a conversation with Dr. Jakovardi while he was performing the angioplasty and placing the stents!”

“The Los Angeles Fire Department saved my life,” he said. They got me to the hospital fast enough that doctors were on me, and in me, right away!”

Six months later, Scrivano is mounting a campaign to save other lives. Literally mounting one, paying for a billboard in the valley that boldly demands, “RESPECT THE LIGHTS, MOVE TO THE RIGHT .”

“People need to remember and be re-educated that we are legally required to immediately pull over when emergency personnel come flying up in front or behind them. Ambulances, fire, police – they are on their way to save someone, and they need the confidence that traffic ahead of them will spread out and make room.  And the seconds they gain from that extra speed count,” he admonished. “I know first hand…”  Because of the speed with which Scrivano received his life-saving treatment, he suffered no lingering damage to muscle or tissue in his heart which is common when too much time elapses.

The billboard on the southeast corner of Sherman Way and White Oak features an LAFD engine and an LAPD patrol car, lights flashing  – and at the bottom says “23 Minutes Saved My Life,” with Scrivano’s signature attesting its truth.

“I want to get the message out,” he told Valley News Group. “If one person pulls over and that one rescue saves one life, I succeeded.”

The irony in the whole episode is that Scrivano was wearing a Station 88 t-shirt when paramedics showed up, and Evan Brooks actually recognized Scrivano as being, “that Blue Dog guy!”

“I feed the guys at Sherman Oaks Station 88 all the time at Blue Dog, and we’ve done numerous LAFD fundraisers over our 10 year history” he laughed. “It’s karma at its best.”

He’s now trying to pass that karma on – by giving others a sign, literally, that they too can help save lives.