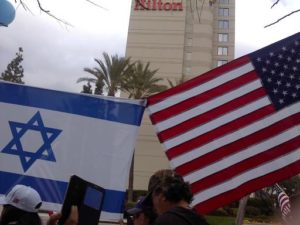 Hundreds of west valley residents, community advocates and  political activists took to Canoga Avenue Saturday afternoon across the street from the Hilton Hotel.

They were protesting a speech by Minnesota Congresswoman  Ilhan Omar to the CAIR organization. Omar has been criticized for her reported anti-Semitic remarks, and CAIR  (the Council on America-Islamic Relations) is a  controversial Muslim organization. The protest itself was peaceful and watched over by LAPD at both ends of Canoga and in front of the hotel. The most agitation was sparked by anti-Muslim posters that sprung up around the area prior to the protest.