Nighttrek: What to See in the October Sky 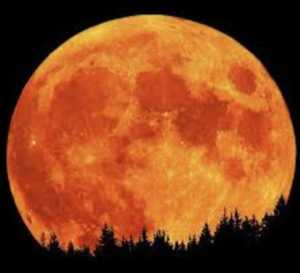 The highlight of October comes on a special night, Thursday the 31st, Halloween Night!

A great “conjunction” occurs when the planet Jupiter and the crescent Moon appear to be touching in the southwest night sky.  Make sure to show this to your trick and treaters!

A second conjunction occurs on Saturday night, October 5 between  the Moon and the planet Saturn.  Look southwest to enjoy this naked-eye sight.  Saturn rings are a beautiful sight in a telescope.

This will be a good night to go up to the star party at the Griffith Observatory.  Make sure to get there by dusk.  Twenty-five telescopes are planned to be set up on the front lawn and the big scope in the dome will be looking at the conjunction.  This event ends at 10:00 pm.

The full Moon of October is the “Hunter Moon.”  Many animals would go through the harvest fields during the night looking for corn that was left behind to eat.  Hunter would come out at the full Moon to catch these animals.  This event is on Sunday the 13th.

Look low in the west on Saturday the 19th and Sunday the 20th to see two planets Mercury and Venus.  Mercury will only stay up for a few nights.  Venus is just coming out of the glow of the Sun.

Make a special note to sit outside on Monday night from 9:30 pm to 11:30 pm.  The Orion meteor show will be going on.  The experts think we will see a few “fireballs” in that time frame.  At 11:30 pm the Moon will rise in the east and make it hard to see the meteors.  We will be looking south during the meteor show.

This is a good month to look at Jupiter with binoculars.  Each night, we can easily see the four brightest moons that Galileo saw with his telescope in Pisa, Italy back in the 1609.

While outside, Jupiter is very bright in the southwest and Saturn is to the left of Jupiter.  To the left of Saturn there is a bright star called “Fomalhaut.”  This star is call the “lonely star,” because there is not another bright star near it.

Look straight up each night after dark to see the giant “Summer Triangle.”  Even as it is October, this formation is easy to spot in October.  If you get away from the city lights, notice that the beautiful “Milky Way” runs right through it.

In the northwest each night is the famous “Big W,” better known as the constellation Cassiopeia, the Queen.

In the east after dark is the famous “Big Square” which is easy to spot.

NASA NEWS:  NASA has been ordered to go back the Moon by 2024 and land a women astronaut on the Moon.  Who will it be?

FUN FACT:  The new space suits for the ladies that go to the moon will weigh 280 pounds with the back pack! Why so heavy? To protect them on the Moon during the day when it is 275 degrees.  When they have to walk outside at night, it will be   -250 degrees.

Remember, things only weigh 1/6 as much on the Moon.  Imagine a fashion show of these suits.  Playtex is making these new suits and some parts of these suits will be made in our own San Fernando Valley!

FUN EVENT: The nighttrek team will be going to the star party called “Nightfall” in Borrago Springs out past Palm Springs.  It is a free star party and all are welcome.  It starts on Thursday night, October 24 and goes until Saturday night October 26.

When not star-gazing, Neill Simmons is a Wealth Advisor with LPL Financial.If you have any astronomy or financial questions, he may be reached at 818-936-2626 or neill.simmons@lpl.com.

Tags:#nighttrek#octobersky#nasas
previousOne Man’s Crusade to Save Lives
nextTake Him out to the Ball Game!