Nighttrek: What to See in the January Sky 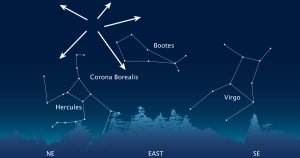 The highlight of January is the meteor shower named the “Quadrantids” that occurs on Saturday, January 2.  Go out after 6 pm and see how many you can spot in an hour.   The meteors will pop out anywhere in the whole night sky.  If you get away from the city lights, three times as many meteors can be seen.

January brings four of the naked-eye planets together in the west. The largest planet, Jupiter, will be low in the west after sunset. Nearby and below Jupiter is the ringed planet, Saturn, which is very faint.   Also high in the west in January is the red planet Mars.  Put January 24 on your calendar as the fastest planet, Mercury, shows up in the west.  It will a very bright point of light located just above the horizon and under Jupiter and Saturn.  This trio will be a great sight!

January 20 and 21 will be special nights to see the planets Uranus and Mars.  Mars will be easy to spot with naked eyes but good binoculars will be needed to see the giant blue planet, Uranus, which is very faint.  Also on these two nights the Moon will be close to both planets.

A popular constellation comes back this January –  “Orion the Hunter.”  Look east at 6 pm as it rises.  By 8 pm it is upright and quite impressive.  Look first at the famous left shoulder star, Betelgeuse.  Right now it is a dull red.  However in two months it may brighten.  Every few months this giant star gets brighter and then dims.  Next notice the three stars that make-up Orion’s Belt. They are three equally bright stars in a row.  Next notice the stars that make the sword that hangs from the belt.  Do they look fuzzy to you?  That’s because they are actually a giant nebula making new stars!

Notice under Orion the brightest star as seen from Earth.  This twinkling star shows three colors, red, white, and blue when it is near the eastern horizon.  This star is Sirius and is the main star of the constellation Canis Major.  Fun Fact:  Sirius is also called the New Year’s Eve star as it is at its highest point at the stroke of midnight.

January 28 brings the full “Wolf” Moon.  Native American Indians lived with the howling hungry wolves that were prowling for something to eat.  The thin crescent moon is a beautiful sight to see after dark on January 15 and 16.  Make sure to take a look.

Vandenberg Air Force Base is planning a big space launch on Friday, January 31 at midnight.  Many a launch has been cancelled at the last minute.  Follow us on Facebook @ Nighttrek for the latest updates on Vandenberg launches and notices about upcoming events.

When not star gazing, Neill Simmons is a Wealth Manager with LPL Financial in Woodland Hills. If you have any astronomy or financial questions, he may be reached at 818-936-2626 or at neill.simmons@lpl.com.