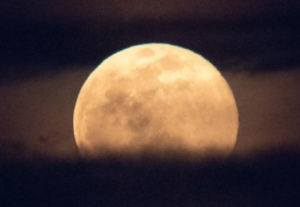 The highlight of April is the opportunity to see the super bright planet Venus in the beautiful star cluster, the “Pleiades.”

Look west after 8:30 pm.  This event can be seen with the naked eye, however binoculars will reveal more details.  The star cluster is also known as the “Seven Sisters.”  Although there are more than 1,000 stars in this cluster, we only see the six biggest with our naked eye.  April 2, 3, and 4 are the best nights.

April 8 finds us with another “Super Moon.”  This is the “Super Egg Moon.”  It is always great to watch this Moon at twilight, when it is at its biggest size and rising above the horizon in the east.

April 10 we get a chance to see the elusive “Zodiac Light” behind the bright planet Venus in the west.   This is a mass of faint, diffuse, and triangular white interplanetary dust that is causing this phenomenon. Go out and look after 9 pm.

Mark April 26 on your calendar when the beautiful, thin crescent Moon will be next to the awesome planet Venus in the west.  Nearby Venus is the bright orange star Aldebaran. This trio will make a great sight.  Also, notice that Venus gets higher and higher and brighter each night  in April.

On April 22 sit outside and see if you can spot a meteor or two.  Then go to bed and set the alarm for 4 am which is the peak time of the LYRID meteor shower.  Stay warm. Chinese texts mention this meteor shower happened 2,500 years ago!  Thus, this is the oldest known meteor shower in recorded history.

Every night in April is a great time to see the famous zodiac constellation, “Leo the Lion.”  In Greek mythology, Hercules was given “Twelve Labors,” the first of which was to kill the Leo the Lion.  The constellation honors his success.  Leo is one of the most easily seen constellations of the 88 patterns of stars in the night sky.

DAWN PATROL:  If you are up before the Sun comes up, go outside and look east.  Behold  the four naked eye planets which are easy to see: Jupiter, Mars, Saturn, and Mercury.  Go out on the morning of the 14th, when the thin, crescent Moon joins the planets to make a great sight!

Astronomy News:  A new planet 640 light years away was discovered and it has rain. However this rain is actually tiny pellets of iron instead of water!  Prince had purple rain, this is hard rain!

Also in the news, astronomers think Mars has OIL!  A new reason to go there.

When not star gazing, Neill Simmons is a wealth advisor with LPL Financial in Woodland Hills.  If you have any questions, he may be reached at (818) 936-2626 or at neill.simmons@lpl.com.