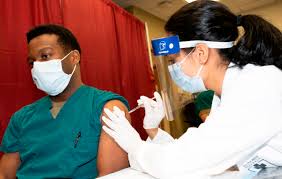 Front-line health care workers and essential workers putting their lives on the line to keep the economy and society going are now eligible to step up to the plate for their first vaccine injection. This will be followed by the second vaccine to be administered three weeks hence.

Now a schedule has been formulated as to when all the rest of us will be eligible following recommendations made by the Advisory Committee on Immunization Practices, followed by approval of the Centers for Disease Control and Prevention.

The second and next group to be vaccinated would include people ages 75 and older whose hospitalizations and death rates are the highest of all age groups. This group will also include teachers, factory workers, police and firefighters, grocery store workers and others who are considered essential to the functioning of the economy and at high risk of exposure to Covid-19.

A third group would follow them comprised of people between the ages of 65-74, anyone age 16 or older with a medical condition that puts them at high risk of complications of Covid-19, and other essential workers. That includes people who work in transportation and logistics, food service, water and waste water, and energy sectors.

The decision to include the oldest people in the second priority group marks a shift for the ACIP which last month was considering giving priority to essential workers over the oldest generations for vaccines in early 2021. That position was based on the argument that essential workers are putting their lives on the line to keep the economy and society functioning. But some officials, health experts, and members of the public pushed back arguing that the nation’s priority should be to protect the oldest Americans.

People 75 and older make up 8% of the population, but 25% of hospitalizations, and have the highest death rate of all age groups by far, according to the CDC. Their rates of hospitalization have also been climbing more rapidly in recent weeks than other age groups, the agency said.

Jose Romero, chair of the ACIP and secretary of health in Arkansas, said deciding how to give priority to the group was wrenching. “This is without doubt the hardest vote that I have taken in my six and a half years on the committee,” he said.

Janey Rifkin is a syndicated writer  specializing in healthcare.