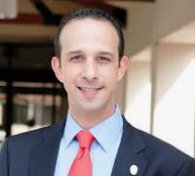 Former City Councilman Mitch Englander was arrested this week in an FBI investigation. He is accused of lying to Feds about alleged cash payments from a developer during trips to Vegas and Palm Springs. He is accused of accepting $10,000 in cash, services from a female escort, $1,000 in gaming chips, a nearly $2,500 dinner and $34,000 in bottle service at a nightclub. In addition, the indictment says he took $5,000 in cash during a Palm Springs golf getaway.

Englander resigned from his 12th district council position which includes West Hills, Chatsworth and Porter Ranch mid term to take a private sector job. He was replaced in the special midterm election and primary last week by his former Chief of Staff John Lee. Questions have now arisen about Lee’s involvement in the bribery as he has confirmed he was on the same Vegas trip. The FBI probe claims both Englander and a “City Staffer B” named in the indictment, sent backdated checks to the developer to make it look like they were reimbursing him for some expenses. A social media campaign has been launched calling for Lee to step down.