LA Plan Would Cut Woodland Hills in Half 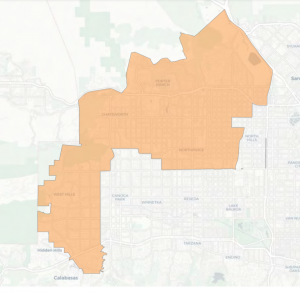 The Los Angeles City Council Redistricting Commission met Monday and Tuesday night and revealed what they decided would be the best answer(s) to the required redistricting map for all LA City Council Districts.

After evaluating the submissions from individuals, Neighborhood Council Community Impact Statements and Community Interest statements, the Commissioners decided to rely on the recommendations of outside contractors to the Commission and decided to submit four of those maps for redrawing the new Council District boundaries.

The current favored plan breaks Woodland Hills into two different Districts at Topanga Canyon Blvd., putting Warner Center and everything east of Topanga Canyon into one District that includes Canoga Park, Winnetka and Tarzana. The section west of Topanga is lumped into the same District as West Hills, Chatsworth, Porter Ranch, and Northridge.

Your next opportunity to speak during a public comment period to oppose the redistricting split of Woodland Hills will be on Monday, September 27, at 4 pm. The Commissioners are hearing from involved citizens from all over the City of Los Angeles but they are not hearing a proportional amount of voices from the West Valley and it is very important that they start hearing from us if we want to keep the West Valley whole.

The Zoom link to call in and participate is on the Redistricting Commission’s website: www.laccrc2021.org. Once you are on the call, use the “raise hand” feature for your opportunity to speak.

Tags:#woodlandhills#citydistricts#redistricting
previousProof of Vaccine Now Sets the Bar – No Shot at Service Without One
next“No Encampment” Zones Approved by City