Is Street Racing Out of Control? 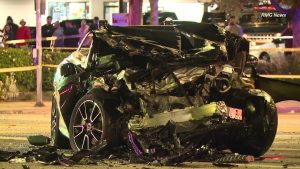 A woman driver in a Prius – last Friday.

Those are just the ones we’ve reported on in Woodland Hills. All were the result of street racing – whether it was alleged competition, car to car flirting or just speeding, the results were fatal.

Last week an innocent woman was killed at Valley Circle and Vanowen. Two other cars were allegedly street racing at Valley Circle when one of the cars sped out of control and struck Colleen Wong’s Prius as she was stopped at the intersection. Witnesses attempted to give her CPR but she was  pronounced at the scene.

Street racing – and its deadly consequences – seems to be on the rise across the valley. All the incidents above were attributed by police to excessive speed, racing and/or reckless driving such as running a stop sign or light.

In most incidents, the drivers were young men.

According to Detective Barrigan of LAPD’s Valley Traffic Division, there are several reasons for that.

“The west end of the valley has such long, wide  streets – Ventura Blvd., Valley Circle, Vanowen and Victory – that we’re seeing an increase in speed racing. That the streets are so long and wide seems to be the attraction,” he told Valley News Group.

“Tampa is another one they see as an ‘open road’ so they use it for racing also,” he added.

Another factor in the equation, especially for younger drivers attempting street takeovers (burning donuts in an intersection for instance) is social media.

Takeovers are not as much of a problem yet in the west valley as they are mid-valley, but takeovers, as well as a lot of the racing and speeding, are done to impress one or more people who want to observe and participate. Many of those actions are then posted on social media.

Barrigan said that they are  regularly patrolling the area of Valley Circle to detain speeders. They are also stepping up enforcement of driving under the influence following the latest crash. As of March 18, fatal traffic accidents are up 35% year-to-date, according to LAPD.