Flying Into the Belly of the Beast: New “Firehawk” Helicopters Designed Just for Firefighting 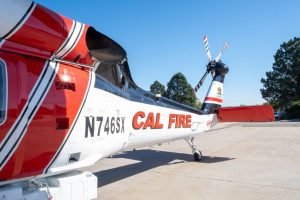 Heat. Winds. Dry hillsides. All of which make Southern California a hot spot for wildfires. The 2018 Woolsey Fire was a lesson to residents in brush clearance, evacuation and emergency preparedness.

As of this week, there’s a new firefighting tool to combat the raging fires that send firefighters, tankers and helicopters right into the middle of a firestorm or the “belly of the beast.”

Cal Fire has just received delivery of 12 new “Firehawk” helicopters, specifically designed and built for fire fighting and rescue. According to Cal Fire Southern Region Chief Lucas Spelman, the new helicopters are a world of difference from the old Vietnam-era Hueys that were retrofitted for fire departments. “The helicopters in use now were made for military operations and reconstructed. They’ve been a great helicopter but you can imagine – the frames are old,” said Spelman.

The older helicopters are also single engine craft that carry only 360 gallons of water at their maximum.  Rescue equipment like hoists and lifts have to be put on as needed,  wasting time and energy in a disaster.

According to Spelman, the new helicopters can carry more people – and most importantly – more water.

The new Firehawks, built by Sikorsky, have dual motors, built in rescue hoists, room for more emergency personnel, and can load  up to 1,000 gallons, triple the capacity of the old Hueys. “What’s exciting about the new tanks is that they can actually dump all 1,000 gallons in two to three seconds,” relayed Spelman.

“From day one, the Firehawk helicopters  were designed for fire fighting, it’s their only job,” he added.

Helicopters have a different task than tankers in a major fire. Tankers essentially fly in and build a line of retardant as a barrier to slow the fire down. Helicopters have more pinpoint accuracy, hitting hot spots and flare ups. “We’re trying to extinguish while tankers are trying to slow it down,” explained Spelman.

Helicopters also can fill out of almost any body of water – reservoir, lake or the ocean, though oceans is a last resort because of the corrosion residue inside the tanks.

Currently pilots are training to use the new “birds.” The old Hueys were very manual, where the new Firehawks feature more electronics. “It’s like having several iPads set up as your heads-up display,” Spelman explained. The pilots spend hours in the simulator and hours in the seat to learn. “We’re coming from 1969 technology to 2020,” said Spelman. “Though a lot of what makes a good pilot is instinct. Sometimes you lose visibility and go by your gut.”

Hueys also can’t fly at night. “As our pilots get more comfortable in the helicopters there will be a time we can start night flying,” he said. “Unfortunately it probably won’t happen this fire season.”

What will happen, though, is that Cal Fire now has 12 new, technologically advanced Firehawk helicopters to use in the next big fire. According to Spelman, L.A. County Fire and L.A. City Fire have each purchased one as well.

Cal Fire is The California Department of Forestry and Fire Protection, responsible for the state’s 31 million acres of public and private forests. As in the Woolsey Fire, the county does the initial attack, then Cal Fire joins in if the blaze grows exponentially.