Finding Those He Thought Were Lost 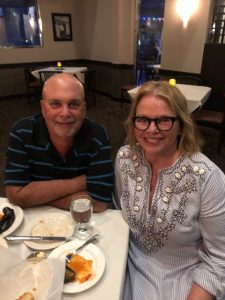 It is a sad story, but it has a happy ending.

Paul Gross was born and raised in New York in the 1960’s and 70’s.  It’s his story now to tell, but it is actually his father’s story.  One of survival, fighting back, keeping others safe, saving the life of a small girl.

Aron Gross, Paul’s father, lived through the Holocaust.  Born and raised in Poland prior to World War II, most of his family was murdered by the Nazis.  Aron and his brother Samuel hid in the forest for survival, existing on potatoes and turnips, hunted by Nazis, including a boyhood friend of Aron’s.

But those weren’t stories Paul heard growing up.  Like many survivors, Aron didn’t really want to talk about what he went through. “He never told  me anything.  A few comments here and there, but never the story of how he and Samuel survived,” he told Valley News Group.

It wasn’t until he listened to an interview Aron did for the Shoah Foundation that Paul learned the story.  “I wished I had watched the video when he was alive.”  By then, both his parents had died and he had no way of expressing all the emotions he was feeling.

One of the things he did was to sign up for Ancestry.com and take a DNA test to try and find any existing relatives.  It worked and Paul was able to locate cousins who were raised in New York.  New York!  Paul was raised in New York – he had cousins that could have been around the corner or the next town over and never knew it.

Paul has been in touch with these cousins, but hasn’t met them all in person.  It doesn’t matter.  They are family.  His family.  For all the people and generations that were lost in the Holocaust, he found what little family he has left.

Finding this all out has been an emotional roller coaster. Genealogical research takes a long time, especially when records were destroyed in the war.  Just sitting down and watching the Shoah interviews is a time commitment.

One of those ways is by speaking to groups and telling the story, like he did recently for the Calabasas Rotary or for Hadassah. Another way he feels he is doing that is by cherishing his family.  They are all Aron’s legacy.  His children, grandchildren and more will know Aron’s story – and the fact that if he had not survived, they would not exist.

How many legacies were lost when over 12 million people, six million of them Jews, were killed in the Holocaust?  How many doctors, painters, sculptures or musicians would there be in the world if not for the Holocaust?

Paul is in the community telling his very sad story, but it has a happy ending.  He is here and he is keeping Aron’s memory alive.  He remembers.  He will never forget.

Laura Levinsky is a life-long valley resident and the stepdaughter of a Holocaust survivor.

Tags:#holocaust#family#foundfamily
previousWhere Else Can They Go?
nextThere’s No More “Fire Season” in California