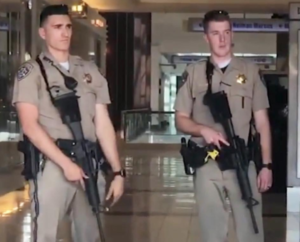 A “smash and grab” robbery at Neiman Marcus on Sunday, August 25, at Westfield Topanga led many shoppers and employees to believe there was an active shooter. CHP West Valley, above, arrived on scene and coordinated evacuation from the mall. Officers will called to the scene around 3 pm after reports of gunfire. Many hid inside the mall while others ran out of the center. It is thought that the sound of glass breaking was erroneously reported as gunshots, leading to the panic. Officers found no evidence of a shooting but did arrest two people on suspicion of robbery.