Enough of Civil Liberties, Do Something With the Homeless 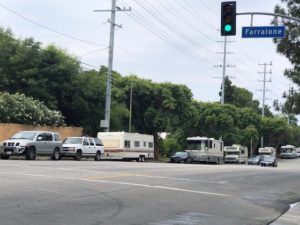 I’m a strong proponent of civil liberties and individual rights. You’ll hear me loud and clear on the issues of freedom on the press and freedom of speech.

But when do we, as a society, a group of people, have rights as well?

I have argued for and against ways to deal with the homeless in this paper – and have gotten a lot of flack from both those that want to be humanitarian, and those that see them as an abomination.

I’m beginning to  get just plain pissed off. With all the promises of the city, and all the money from Proposition HH, our homeless problem is worse than ever.  Garcetti promised to clean up L.A. – and withdrew his presidential bid when various news outlets pointed to skid row as the great job he wasn’t doing.

Right here in my own parking lot I trip over people shooting up or sleeping it off. We couldn’t use our recycling bin  because someone dumped used needles in it. The back lot smells like urine and when I walk to get my mail I avoid stepping on feces on the way.

I’m not a city official. I don’t have all the answers. I’m not sure I even have any answers. But the fact that the city is spending over $500,000 per apartment unit – and none have actually been moved into yet – gives me pause.  The plan is to build 10,000 units. When – and if – they are ever constructed, that leaves 49,000 homeless still without shelter. Where are they supposed to go? I know four of them are in the alley behind my office.

The real problem is, of the 59,000 that were counted this year, how many of them actually want help?

Homeless vs. transient – we hear that a lot. I’ll give you that the ones living in RV’s are at least off the street and trying to get it together – though the line-up of campers on Oxnard Street west of Topanga stays longer than the allotted time and  some are pretty raunchy.

But back to civil liberties. When do people sleeping on a public sidewalk become a public nuisance and infringe on other’s civil liberties? When do dirty needles in my trash bin become a health hazard?

Governor Jerry Brown passed SB 1045 last year,  which basically expands the 5150 72-hour hold for someone deemed to be a danger to himself or others. SB 1045 states: “Existing law establishes a procedure for the appointment of a conservator for a person who is determined to be gravely disabled as a result of a mental health disorder or an impairment by chronic alcoholism, as specified, pursuant to a petition to the superior court by an officer conducting an investigation and concurring with a recommendation of conservatorship. Existing law also establishes a procedure for the appointment of other types of conservatorship or a guardianship as ordered by the probate court.”

In essence, someone drunk or drugged out to the point of oblivion could be taken under a conservatorship for months or up to a year to be cleaned up.  San Francisco is struggling to implement the law now, as they have as many homeless problems as we do.

The question is – where do we take them? It’s all well and good to pass a law saying we can get them off the street – but where to take them? The money to built 10,000 new units could be better spent on projects like the bridge housing in Canoga Park – but throw in mental health services, detox, rehab and more.

I’m all for compassionate care, and taking care of the truly homeless who need help.  But at this point  I’m all for getting the drug addicts off the street and out of my parking spot.

Cops and city workers have already gotten sick from  filth and detritus left by transients. I don’t want one of us to be next.

Kathleen Sterling is the Publisher of Valley News Group.

Tags:#valleynewsgroup#homeless#localissues
previousTapping Into Rescue Tactics
nextFrom Their Farm To Your Table