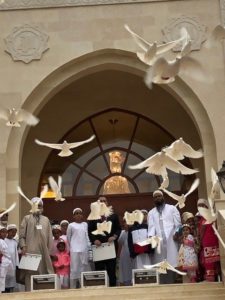 What do all these people have in common? They gathered at  the Ezzi Masjid Mosque in Woodland Hills Wednesday night to share messages of peace.

Adnan Hamid opened the ceremony marking the annual Iftar reception.  Iftar is one of the religious observances of Ramadan and is often done as a community, with people gathering to break their fast together. After leading the Pledge of Allegiance, Hamid spoke to the assembled group of members and community leaders about  the friendships the various religious leaders present shared, and how it seems that faith of all kinds is under attack. “Hate has no place in religion,” he said. “We must seek ways to help our community come together with common visions and fraternity.”

Councilman Bob Blumen-field echoed those sentiments, saying that “it is time to dedicate ourselves to peace.” He recalled that the local interfaith peace march that involved members of many faith communities and residents last year started at Temple Aliyah and ended at Ezzi Masjid.

“All faiths and all backgrounds have a responsibility to go beyond tolerance – we need to get to the next level and be unified,” said Blumenfield. “Members of any community that have faced hate – Jewish, Armenian, LGBTQ, have to strive for a more empathetic and unified tomorrow.

To that end the event included an informational   exposition on the members of Ezzi Masjid, who are Dawoodi Bohras.

Dawoodi Bohras are followers of His Holiness Syedna Mufaddal Saifuddin, the 53rd Dai al Mutlaq, the spiritual leader of the community, who trace their spiritual and religious heritage of faith, peace and prosperity to Prophet Mohammed.

The exposition showcased the strong roles of women in the community, their philanthropic efforts worldwide, educational philosophy and more.

Attendees were given tours of the complex and an opportunity to observe Iftar preparations and prayer.