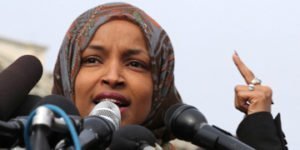 This is a volatile week in the west valley.

Omar has been criticized for her recent remarks claiming that Jewish organizations have paid U.S. politicians to support Israel.  She tweeted, “It’s all about the Benjamins,” drawing a backlash against one of the first two Muslim women elected to Congress.

CAIR (the Council on American-Islamic Relations) labels itself a grassroots civic rights and advocacy group, America’s largest Muslim civil liberties organization, working to promote a positive image of Islam and Muslims in America.

Various groups have announced that they will be protesting the event, to be held Saturday evening at the Hilton Woodland Hills.

Karen Kenney, founder and head of the local group San Fernando Valley Patriots, said, “Rep. Omar’s recent comments attacking those who stand with Israel; her support of CAIR, which has proven ties to Hamas, her promotion of Sharia Law and the recent resolution of the Democrat Party, which refused to censure Omar’s behavior as an elected member of Congress, is why we support this grassroots event.”

She said they will be joined by ACT Calabasas, a pro-Israel, anti-Sharia organization, and  the group Children of Holocaust Survivors.

Kenney told Valley News Group she didn’t want to label their efforts a protest, but rather a statement at the rally.

However, an eventbrite post is inviting participants to a “California Rally Against Ilhan Omar,” saying “America-haters are not welcome in California” and saying they need people outside and inside the venue, “for maximum effect.”

According to CAIR spokesman, Eugene Fields, the event is already sold out. He told Valley News Group, “There are approximately half a million American Muslims who live in the greater Los Angeles area, with a fair amount in the valley. Reception to Congresswoman Omar’s participation in the event has been overwhelmingly positive, with a long waiting list of community members and civil rights allies trying to get in. There is a segment of the population that might not understand or agree with the mission of CAIR, but everyone has a first-amendment right to peacefully protest.”

To make sure that the protest and rally does stay peaceful, a strong LAPD presence will be at the Hilton and on the street in front of the hotel.

A Hilton spokesperson said, “We are simply a place of business that provides meeting and conference space for people to hold events.”

Fields confirmed that Saturday night CAIR would be honoring the organization Jewish Voices for Peace. “We are working with the hotel,” he told this paper. “This isn’t the first time someone has protested a CAIR event. This is nothing new.”

West Valley Councilman Bob Blumenfield said, “While I condemn Congresswoman Omar’s anti-Semitic tweets and comments about why people support Israel, she has the right to say what she wants. So do the people who disagree with her and I understand people will be protesting. My office has been in contact with LAPD regarding security at her upcoming event in the West Valley and they have assured me that the situation will be under control.”

Congresswoman Omar’s office was contacted repeatedly for this article but did not respond. If they do we will post it on our website, www.valleynewsgroup.com.