Congressman Brad Sherman: Inside the Siege 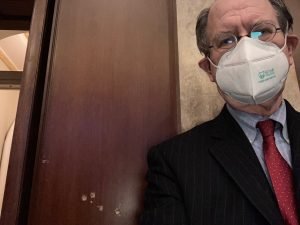 Congressman Brad Sherman started the day, January 6, as the guest speaker at a West Valley Warner Center Chamber Zoom meeting. He then left his office to check on the electoral vote counting.

“It was a big day,” he recounted. “I needed to get to the House floor to see the important part – how Pence was handling things.” Sherman said he knew there were demonstrators outside the Capitol, so he’d taken a circuitous route that morning to get to the Rayburn building, which connects to the Capitol via a tunnel. “Because of COVID they don’t want a lot of people on the floor, so I stood at the door where the cloakroom opens, and saw Pence play it straight,” he recounted.

He then returned to his office to watch the debate on screen, and was told that the rioters had broken in. “I thought there would be loud and angry demonstrations, but I never thought they’d breach the Capitol,” he recounted.

“Initially we felt safe because we have intense security. Machine guns.  We didn’t feel we were in imminent danger until we were told the police had lost control and the insurrectionists had gained control of the Capitol – they then had access to the whole complex.”

He and his staff locked their doors and followed instructions to keep silent. For the next five to six hours they got texts from colleagues and watched what they could see on the screens. “I saw the first tear gas in the rotunda – it ripped my heart out to see that. There is no place that symbolizes our democracy more.”

Sherman said that he was even more fearful after the event – when he found out how violent some of the crowd was.

“When you bring zip ties, when you chant ‘Hang Mike Pence, where is Nancy Pelosi,’ then you realize some of the rioters wanted to be hostage takers and murderers,” he said.

The signs were there and they should have had much more serious security, he counseled. “The fact that the Capitol perimeter has not been breached since they wrote the ‘Star Spangled Banner’ may have lulled them into the thinking that led to inadequate security.”

We asked Sherman if he was worried about threats to storm the inauguration.

“I’m going to the inauguration. I was there at the inauguration of Donald Trump and will be there for his successor. I will be happier this time,” the Democratic congressman laughed.

He said he was counting on security to keep him safe. “Obviously it will be a very shrunk-down event. In the past I could give out 250 tickets. This year I got one.”

At the time of this interview National Guard troops were moving in to the Capitol in preparation for the January 20 event.

“Up until this inauguration the goal has been to secure the outgoing president and the incoming president,” Sherman related. “No one guessed they wanted to hit random congressman. Now some feel it would be a big victory if they could hit anyone.”

He feels that there is no way now they can underestimate security threats in the next week or two, but he emphasized, “Democracy prevailed. Our institutions are strong, though shaken by a president who is unique. Even on January 6 we did our  work. We counted the ballots and certified them. It’s now time to move forward.”

However, Sherman added that, “We may be seeing the death of the Republican party. Look – we’ve had disagreements, but I’ve never seen a group of people chanting to hang a Republican vice president and have a Republican president saying they’re wonderful.”

Sherman said he’s back to business as usual. He has scheduled a town hall Zoom meeting with constituents for January 21.

“I thought we’d be  speaking on how to get your stimulus check – but I guess we’ve more to talk about,” he laughed.