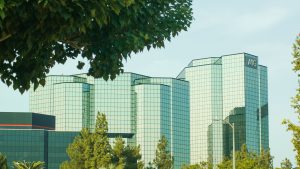 With COVID-19, more and more people are working from home and not returning to the office environment.

Buildings appear half-empty, and many companies have announced they are not bringing back their employees anytime soon. With small firms requiring employees to work remotely, and major companies like Google announcing they’re not bringing their people back in-house until next summer,   what is the future of the commercial real estate market?

“We see the office market down about 75% since March,” said Scott Silverstein, a commercial broker with Lee Associates in Calabasas. “Most transactions are renewals or contractions – tenants downsizing their space. I would say only 20% are new transactions.”

According to Costar Search Analytics, the valley had a base of 23 million square feet of office space, but has lost occupancy of 700,000 square feet since March – most of it occupied but not performing (empty).

Costar reports vacancy rates in August  for office space at 14.1% for Warner Center, 11.2% for Calabasas, and 18% for the valley as a whole.

Hal Cook with Cook Commercial, a tenant representation firm, said, “I estimate that 13% of local office tenants are in default or receiving some sort of forbearance from their landlord. It’s higher for retail tenants – more like 30%.”

That is echoed by Lisa Gelb of the Gelb Group, a major landlord in the west valley.  “We are only seeing 20 to 30% of our larger tenants not coming back completely. But our restaurant tenants are struggling, as are hair and nail salons. Small mom and pop businesses like a caterer, SAT prep and ticket broker have gone out of business.”

Silverstein said he has had a number of tenants call him and say, “We’re done. I can’t open.” He said even with deferrals they still have to pay the money back at some point, and they can’t afford their rent.

What can tenants do?

According to Cook you can’t just cancel a lease. “Typical Force Majeure clauses do not allow for non-payment of rent. However, you can’t get blood out of a stone either, so smart landlords are working with their exiting tenants to help them survive.”

Silverstein addressed the landlord side of the equation. “I’m telling my landlords that during this time make deals as quickly as possible. If you want to increase your occupancy levels you have to cut deals. If you have the ability to do it give concessions.”

Cook told Valley News Group, “Smart landlords recognize it is much more difficult to re-tenant space than it is to work with your existing tenant base. Few have actually moved totally out. Between the two months of slack tenants get in LA by law, government loans and the landlord’s forbearance, most are still hanging on in some form. It’s just unclear how long they can do so.”

Major landlords are cutting rents now, Silverstein said. Rents at over $3 a square foot have been reduced by 40-50% and are now in the $2.60 range.  “We still beat westside prices where they are $5-$6 a square foot,” he added. “We do see companies moving to the west valley from over the hill.”

“There are tenants looking for space,” said Cook.  “But not as many as there were a while ago. We are already seeing deep discounting and I think there is a market timing event on the horizon.”

“We’re probably doing five deals a month,” said Gelb. I think if we had more small space, less than 1,000 square feet, we could lease more. Now that kids are being home-schooled, people can’t work from their home offices as efficiently.”

According to Silverstein there is a lot of pent-up demand for medical space. Doctors and practitioners are looking for their own space, not necessarily into medical buildings but more retail space with immediate access from the street.
Gelb agreed. “We’re leasing to home health care, hospice and that industry,” she said.

“Deals are shorter now,” said Silverstein. “You don’t see a lot of five to 10 year leases.  We are seeing a lot of subleases – companies letting go of space they don’t need.”

He said the sublease market expanded by 50% right away with the pandemic. “Larger companies are giving up space because they’ve tried remote working – and it’s working.”

Is the market dead, dying or dormant?

“It’s in the Twilight Zone,” said Cook. “Most surprising is how impactful it has been in such a short period of time. There will be long-term effects, but I’m not sure we have seen all the short-term effects yet.”

Silverstein concurred. “We have a two- year period until we see some sort of stability. Right now if COVID occurrences come down we could move forward, but if they jump back up this  winter it could throw us right back in the same boat.”