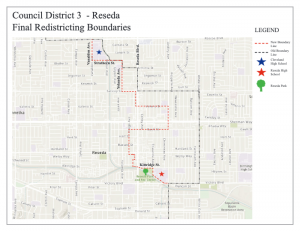 After a nearly year-long process to hear comments from the public on their communities of interest and review census data, this week the City Council approved a final map that will define their districts for the next decade. Similar to the process at the federal and state levels after every census, these districts must be redrawn to balance population and protect voting rights.

The Council’s action follows the extensive outreach, public comment and analysis from the appointed Redistricting Commission (LACCRC). Over the past few months several different configurations of the Valley and City were proposed by the LACCRC. It ultimately proposed separating Woodland Hills and Tarzana from Canoga Park, Winnetka and Reseda by putting them into different, newly configured districts. It also separated the Warner Center between two districts and moved Pierce College into the northern district. These changes, along with the extremely high number of constituents who found themselves put into new districts, prompted outcries from residents, Neighborhood Councils and various Councilmembers including Blumenfield, Krekorian, Martinez and Raman.

While the City Council kept most of the district lines drawn by the commission and honored some of its core principles (i.e. only having one cross mountain district), it made major changes to the lines in the Valley.

In the West Valley, the Council’s final map retains the same five communities currently represented by Councilmember Bob Blumenfield in one district including Woodland Hills/Warner Center, Canoga Park, Winnetka, and Tarzana (CD3). While Reseda representation is currently split between Blumenfield and Councilmember John Lee, in the new map, Reseda will be shared by Blumenfield and Councilmember Nithya Raman. Lee will continue to represent Northridge and areas north of CD3. Raman will not only represent part of Reseda, but also Encino and parts of Studio City that will be new for her (about 40% of the new CD4). She will continue to serve Sherman Oaks, Los Feliz, the Hollywood Hills and part of Silver Lake (about 60% of the new CD4).

Because both West Valley districts represented by Blumenfield and Lee grew in population more than most areas of the city, both had to shrink in order to maintain a population roughly equal to other council districts. For Blumenfield, this change resulted in him representing fewer Reseda area constituents and having the eastern border of CD3 moved westward. Aside from this small change, the new district is almost identical to the current one.

Throughout the process, there was significant testimony calling for changes in certain areas of the city that had far reaching ripple effects. For example, putting all of Koreatown in one district required changes in several council districts. The Valley’s request for a ‘fair share’ of representation to match its population resulted in a newly drawn 2/3 Valley seat (CD4/Raman).

“I have always said I love representing my current district and had hoped to continue to serve these communities,” said Blumenfield. “While the commission map achieved many goals, it disrupted communities of interest in the West Valley, so I was pleased to restore most of my district and continue working with neighborhood partners on our projects including those in Warner Center, Canoga Park, Reseda and along the LA River.”

The Council has one more public hearing and it needs to take a final vote on the ordinance. Given the overwhelming vote (12 yes, 2 no) on the proposed new lines, it’s highly unlikely there will be any further changes. The new City Council District lines will officially take effect on January 1, 2022.

Tags:#westvalley#reseda#blumenfield#redistricint#krekorian#redistrictingmap
previousHiring Signs Are Everywhere – Where Did All the Workers Go?
nextSmash and Grab Hits Nordstrom Topanga