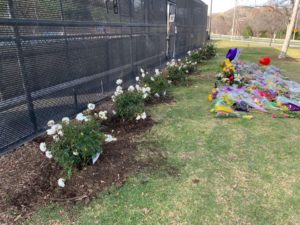 In honor of the January 26 helicopter crash in Calabasas that killed Kobe Bryant, his daughter and seven others, the City of Calabasas has planted nine roses in De Anza Park. The park became an informal memorial in the days following the crash, and the cards, memorial gifts and messages left there were collected and sent to Bryant’s Mamba Sports Academy, which is coordinating delivery of those items to the families.  According to Calabasas Mayor Alicia Weintraub, there are future plans to pay tribute to the victims in a more permanent manner.

Tags:#memorial#roses#calabasas#helicoptercrash#kobe
previousCalabasas Copes with the Crash That Killed Kobe and Eight Others
nextBreaking News From Westfield!