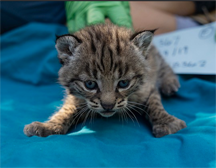 Despite the destruction the Woolsey Fire left in its wake, it only takes a quick glance at the hillsides to see that the environment is thriving more than ever. While many animals were driven from their homes, it seems they have started a new chapter as well. A young bobcat that was able to survive the deadly wildfires last year has given birth to four kittens!

Approximately four weeks old and weighing around one to one and a half pounds each, the kittens were weighed, measured and tagged by biologists while the mama was away.

Their mother, tagged as B-362, was identified just the day before the start of the Woolsey Fires, when she was captured in an area of Thousand Oaks. Clearly resilient to such a dramatic event, the kittens were found nestled in thick brush in the back of a Westlake Village home. Biologist Joanne Moriarty credits the cat with having, “to deal with her habitat getting completely burned in the fire and then finding a new home in an unburned area.”

Traditionally, kittens will be left in their dens, protected from the outside world, until they are around three months old when they will then begin shadowing their mother and learning how to hunt. At around nine to 11 months old, the baby bobcats become independent.

While much debate has circulated around the presence of wildlife in the surrounding residential areas, it’s evident that the bobcats are able to adapt and survive despite elements against them.