Blumenfield Vows to Move Homeless from Winnetka – But Will They Leave? 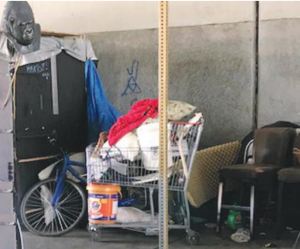 Councilman Bob Blumenfield has set the date of November 16 to remove all homeless encampments from the Winnetka and Corbin underpasses of the freeway.

LAHSA  (Los Angeles Homeless Services Authority) has identified 33 people that live in these underpasses, and actually traverse back and forth between the two.

LAHSA’s new pilot program is targeting specific communities in Los Angeles, to move the homeless out of camps into shelters and/or housing. The West Valley is the first location in their pilot program. LAHSA has said that this is an ambitious undertaking. “Even though our numbers here are smaller than other locations, if you can’t do it here with this number how can you do it across the city?” asked Blumenfield.

He insists they will find housing for all those in the area. His goal is  to find it for all 606 unhoused in his district, starting with those in the underpasses. “We’ll do whatever it takes – vouchers, hotel rooms, cabins, we’re going to get them off the streets.”

LAHSA’s plan is to house these 33, and per District Judge  David O. Carter’s preliminary injunction that it is unsafe to live under an underpass, then make sure camping is forbidden in the underpasses.

But what if the homeless don’t want to leave?

As he approached them, one man, smoking meth, attempted to hide his pipe and refused to talk. The other man was willing to talk on the condition of anonymity.

“Some will want to go,” he said. “But I’ve heard they’re very restrictive. You can’t have visitors. Can’t bring in your girlfriend. You have to abide by someone else’s rules. Some of us will go. A lot won’t.” He shrugged and said, “Some of us are going to the meeting tomorrow to see what they say.”

LAHSA set up a meeting for just the homeless of the area, not open to the general public. The meeting at Taft High School on Thursday morning was designed to meet the homeless as a group, not one on one, to start the process to get them into homes and shelters. “We can do really intensive assessments and show them what actions they can take. We can tell them what housing is available and can determine the appropriate solution for each person,” said Amy Perkins, LAHSA’s Special Director, Housing Central Command.

What about the drug addicts? “People are able to regulate or even heal addiction more easily indoors than outside,” said Perkins. “It takes a lot of socialization and a lot of trust. If they express an interest in kicking their addiction we get them help. Those that aren’t ready will probably move to another camp where outreach can see them.”

Her biggest obstacle, she said, was finding more affordable housing. “We cannot build our way out of this crisis,” she explained. “We need to find more landlords and owners  willing to participate.”

Another “resident” of the Winnetka underpass, Amy, was also interviewed by James, who said she – and her tent – seemed clean. Amy was aware of the possible move, and the LAHSA meeting, but told James, “Yeh, but I’ve been on the list for Project Roomkey since before the pandemic, and haven’t gotten in. Now they are talking the earliest will be October 17.”

Perkins said that yes, Project Roomkey is coming to an end. They are demobilizing hundreds of beds and the final hotels will close in February. That is why she stressed the need to find more permanent housing. “If we go to an encampment and show them the actual unit – here is the apartment you can have – then we are incredibly successful moving people. It’s no longer just an idea but a reality.”

Amy said that she would like to go into a shelter or hotel, because “she’d feel safer there and her stuff wouldn’t get stolen.” However, she also said if she goes she’d like everyone in the underpass to go to the same place. “We all know each other and look out for each other” she told James.

When questioned about her neighbor, an obvious tweaker with missing teeth hiding in her tent, Amy said, “I don’t know if everyone will go. Those places are very strict.”

James also interviewed a nearby resident, who has a background in addiction.  “I sympathize with those living there. Most have an illness. They are addicted to some substance – heroin, meth or alcohol. They are not going to go into treatment unless they’re forced to,” he offered. “The problem with addicts is they don’t want to leave their supplier. You can offer them housing but they may not want to go and adhere to the rules of the shelter. Addiction is a strong motivator. Can you make them choose to give up the addiction and go to a shelter or keep using?”

He echoed the sentiments of several other residents, saying, “Unfortunately, their problem is now our problem. We worry about assault, degradation of the neighborhood and robbery. Do you know what it costs to feed a meth addiction?”

At the Thursday meeting, hosted by L.A. Family Housing and held at Taft High School, Christopher James reported that about 20 homeless did show up. Seven came for the food and left, but the others stayed to talk to counselors about housing options.

About the same number of  residents came from the adjacent neighborhood. They were angry at politicians for not doing more. A group from College Acres Neighborhood Watch threated to cancel Candy Cane Lane in December as a protest to get the attention of politicians and press. “Pro homeless people attack us for being against the homeless,” said one neighbor. “The problem here at Winnekta is that they have Ralph’s where they can steal food and use their EBT card, Starbucks where they use the bathroom and a recycling center so they can get money. If you clear them from the underpass they’ll just move into the neighborhood like the one living in his car did.”

Some of the neighbors did calm down, according to James, after they spoke with L.A. Housing representatives and realized they were there to help.

Blumenfield’s deputy Keith Banks was at the meeting and said, “We are really trying to do something within the limits put there by red tape, judges, federal and state law and restrictions on mental health. Give us time, be patient, and let’s see if this works.”

Tags:#communitymeeting#winnetka#housing#homeless#blumenfield#freewayunderpass
previousIs Private Firefighting Just for the Rich?
nextVoting Should be Simple – But Not This Year! How and Where to Vote