Is Private Firefighting Just for the Rich? 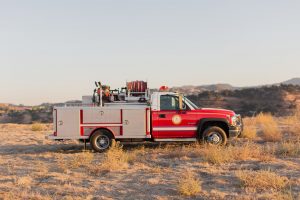 Kim Kardashian brought in a private crew during the Woolsey Fire. Insurance companies pay for fire specialists for those homeowners on the Forbes 400 Rich List. The City of Hidden Hills has its own fire engine.

But are private firefighters just for the rich?

“Not at all,” says Kris Brandini, owner of  Firebreak Protection Systems in Simi Valley.

According to Brandini, service to a property by their private service can range from  fire monitoring and reporting to fire prevention spraying or actual deployment during a fire.

“It all depends on the size of the property and location,” he told Valley News Group.  “Before we are hired we do an analysis – what is the threat, what can be done before a fire, and how can we access the property during a fire?”

Several private companies offer the service of fire prevention, including brush clearance and the more defensive phosphate-spraying. Brandini says for many homes south of the boulevard bordering Mulholland,  “You are not allowed to cut the brush if it’s public land, but you can spray it.”

It is true that many insurance companies do hire private fire fighting services to do this. Tim Gaspar of Gaspar Insurance in Woodland Hills says that in order to qualify for this service your home must be at least 3,500 square feet and be insured with a private carrier like Chubb, Nationwide or AIG.

“The insurance companies are not really concerned with the market value of a home,” said Gaspar. “It’s all about replacement cost. And you pay for that insurance. The cost to insure a home in a fire zone can vary greatly – but the premium can easily be over $50,000 a year. It’s actually gotten difficult for folks in Bell Canyon and some parts of Hidden Hills to get insurance with these carriers because they are too close to brush for most companies.”

And the Hidden Hills private fire engine? According to Hidden Hills City Manager Kerry Kallman, the used fire patrol vehicle is more of a squad car with a 500 gallon tank. “We haven’t used it for fire, but could if a small spot fire started. It’s more of an emergency response tool, with medical, tree cutting and communications equipment on it for when or if we have to abandon city hall.” During the Woolsey Fire some private firefighting companies “did check in” to the community, but Kallman said the city doesn’t contract with a service themselves.

Chris Dunn, the founder of Covered 6, a private security firm outside Los Angeles that contracts with homeowners in nearby Malibu and Hidden Hills, has said he is planning to cross-train his security guards to fight fires and hopes to offer a subscription-based fire protection service.

What does LAFD think about private services? Their public information spokesman told Valley News Group, “The Los Angeles Fire Department does not independently assess these agencies or private services. Often it’s the insurance companies that hire them. LAFD does not have an opinion on them.”

Brandini says private services offer  protection – but also peace of mind. “The shift to private firefighting is because of the personal attention given. We update you during fire. We can call and say your house is fine. We can check on pets, belongings. We are evolving into a concierge service, but not for the wealthy only.”

Tags:#firefighters#privatefirefighters#rich#
previousWorried About Fire? Evacuation? Document Your Property Now
nextBlumenfield Vows to Move Homeless from Winnetka – But Will They Leave?