The Reel History of the Valley: “Movie Ranches: More Cameras than Cows” 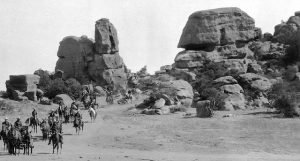 A visitor to the San Fernando Valley in the early 20th century would have been treated to the sight of more than a dozen ranches dotting the plain.

But there were few herds of cattle throwing up clouds of dust across the Valley floor; not many chuckwagons emitting odors of hearty meals being prepared; and only a small number of rugged-looking cowpunchers packing six-shooters on their hips.

In fact, most of the Valley’s cowboys wore make-up and were more concerned with looking good rather than rounding up errant steers. The only ranches of importance in the Valley were movie ranches, and they played a pivotal role in the history of motion pictures.

In their book The Western, George Fenin and William Everson sum up the attraction of the genre: “The western theme, based on the triplex system of the hero, the adventure, and the law, has at all times been fascinating to movie audiences.”

There were two kinds of movie ranches, those bought by film companies specifically for location shooting, and ranches created to rent their facilities to smaller studios and production companies that couldn’t afford their own spread.

By far the most popular movie ranch was the Iverson Movie Ranch; film historians estimate that more than 2,500 motion pictures and television shows shot some or all of their outdoor scenes at the Iverson Ranch.

In the 1880s, Augusta Wagman, a Swedish immigrant, homesteaded 150 acres in northwest Chatsworth. In October 1888, she married Norwegian immigrant Carl Iverson.  They expanded their holding to more than 500 acres, and, by about 1912, were allowing movies to be shot on their property. Perhaps the first film shot on the Iverson’s property was D.W. Griffith’s “Man’s Genesis” in 1912.

They soon concluded that there was more money to be made in movie-making than ranching or farming.

By 1920, the Iverson Ranch was the most popular location for westerns and other outdoor filming. In addition to its rugged terrain and numerous trails, over the years the Iversons built a complete western street and ranch sets, numerous miners’ cabins, stagecoach relay stations, and other structures.

Parts of what is perhaps the greatest western ever made, “Stagecoach” (1939), starring John Wayne, were filmed at Iverson. Republic Pictures shot scores of western films and serials at the ranch.

With the advent of television, the ranch hosted productions of “The Roy Rogers Show,” “The Gene Autry Show,” “The Cisco Kid”, and “Zorro.” Scores of popular TV shows, including “The Virginian,” “Bonanza,” and “Gunsmoke” were also filmed at the Iverson.

But not only westerns were filmed on the ranch; the Iverson Ranch stood in for Africa, India, and even Pacific Islands. John Wayne’s “The Fighting Seabees” (1944), “The African Queen” (1951), starring Humphrey Bogart and Katharine Hepburn, and even “The Lives of a Bengal Lancer” (1935), starring Gary Cooper and Franchot Tone, were filmed in whole or in part at the Ranch.

Jerry England, who has written extensively about the Iverson, noted: “Iverson’s eccentric system of charging film-makers included a charge of 50 cents per day for each person entering the ranch, 25 cents per horse per day, $1 per day for light vehicles, $2 per day for trucks, and $100 per day for each additional camera and generator.  There were additional charges for electricity and water usage.”

The advent of the Simi Valley Freeway (118) split the Iverson Ranch in half. The freeway’s noise, along with the near-demise of the Western film genre, spelled the Ranch’s doom. One of the last films shot on the ranch was “Support Your Local Sheriff” in 1968, starring James Garner and Joan Hackett. Not surprisingly, it was a spoof of westerns.

By the 1960s, directors had given way to developers, and houses of varying types took over much of the ranch property. The famous Garden of the Gods, with its many rock formations, north of Santa Susana Pass Road, including its popular Lone Ranger Rock,  where Silver reared at the top of the Lone Ranger program, is still there.

The Iverson Ranch is gone, but if you listen carefully, you can still hear – faintly, a deep voice intoning – “A fiery horse with the speed of light, a cloud of dust, and a hearty Hi-Yo, Silver, away!”

Martin Cooper,  President of Cooper Communications, supervised PR for the Academy of Motion Picture Arts & Sciences for 10 years. He is Chairman of the Board of the UCLA Film & Television Archive, a Fernando Award Honoree, and Past Chairman of VICA. He has written four books, two of them on the San Fernando Valley.

Tags:#historyofthevalley#ranch#cowboy#moviestudios
previousVoting Should be Simple – But Not This Year! How and Where to Vote
nextWestfield Kicks Off the Holiday Season With “Shop Your Heart Out” for Local Charities