A Christmas “Tail” of Salvation 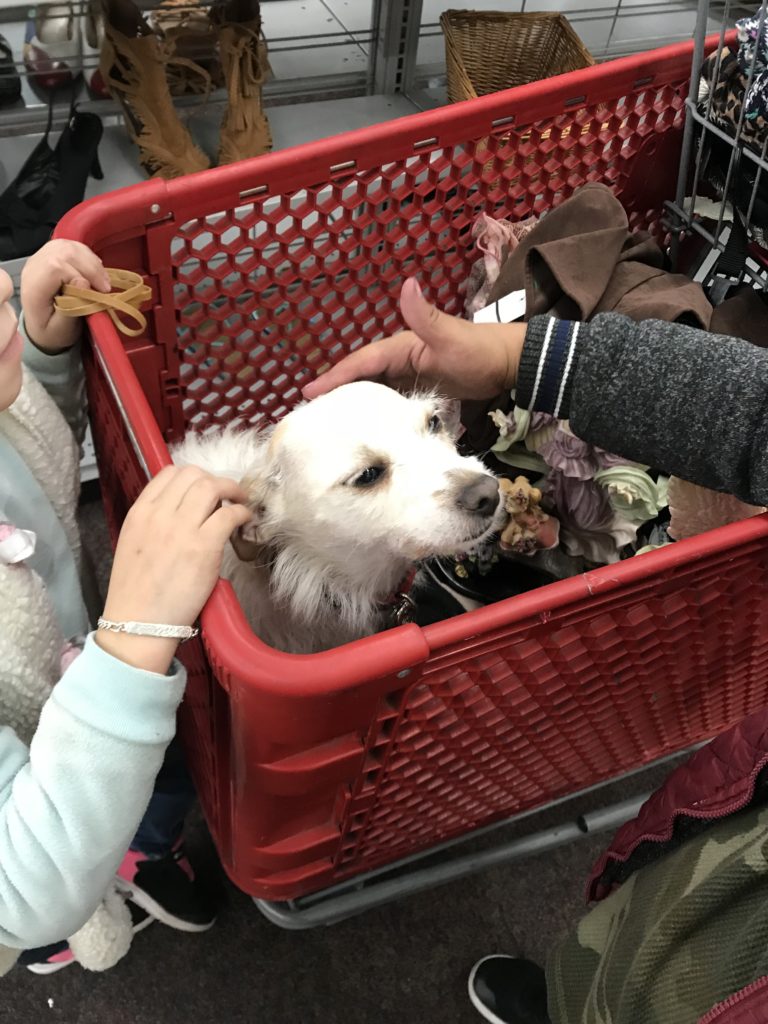 If you’re not a dog lover, you may not connect. Flip to the articles about the local business bootcamps or the myriad of entertainment options happening around town. However, need I remind you that isn’t this the season of Hallmark happy endings, Chicken Soup for the Soul kind of tales and stories of Christmas miracles? The time when it seems a little extra magic is in the air?

Now that I’ve set you up for what’s to come, let me tell you about an amazing tale, or tail as it would be…  It all started about three years ago, or I should say about 12 years ago when it was decided that our elderly mother now required 24-hour caregiver assistance. After struggling to find the right fit, we finally found an angel….Sandra. One thing that Mom and Sandra share in common is that they are both animal lovers.  Neither of them has ever met a stray dog, cat or bird with a broken wing they didn’t love and try to rescue. So, fittingly, out on one of their adventures about three years ago they came across a poor little abandoned white mutt. They named her Coco.

Well, lo and behold, it turns out, when Mom and Sandra rescued Coco she was pregnant.  No, not Sandra silly, and certainly not Mom, but Coco the mutt was with child, or childs, or pups as you would say. Well Mom and Sandra couldn’t have been happier as the only thing that dog lovers love more than a dog is MORE dogs, and especially puppies. Fast -forward a few months and, with Sandra midwifing and Mom looking on, Coco gave birth to four healthy and adorable little pups.  Two looked just like Coco, mostly all white with wirey fluffy hair and two that looked like a Jack Russell type that has markings all over like a cow.

As soon as the puppies were old enough, two were given away to friends, Sandra and Mom kept one, and, surprise surprise…I took one.  Now, I’ve just outed myself as just as much of an animal lover as Mom and Sandra.  It’s true.  I already had two rescues, both Pomeranians, one big and one small. After the puppies were weaned I kept one of the Coco knockoffs, a beautiful little boy pup but I didn’t get to name him.  Sandra already had.  He was “Pancho” and it seemed to fit as his first language was Spanish due to Sandra cooing and lullabying him in her native tongue, and also the name just seemed to fit.  Pancho as in Pancho Villa.  He was, and still is, a little outlaw always getting into trouble and barking at unseen threats and intruders. Pancho’s brother, whom Sandra and Mom kept, was named Lucas so Mom, Sandra, Coco and Lucas were one big happy family.

However, there was trouble brewing in paradise.  Coco, it seems, had a problem with men.  While she was sweet as could be around Mom, Sandra, my sisters or any other girl or woman, she was hyper aggressive with men.  She would attack me, my brother, the pool man, the gardener, Mom’s physical therapist or any other man who came into the household. Sadly, she must have been abused by some man or men in her life. We all just took it in stride and avoided her but Sandra made the tough decision and decided to give her away.  I wasn’t aware of this until one day I stopped by and Coco just wasn’t there.  It was implied that she had gone to a friend of Sandra’s and once again there was peace in the house.

To simplify the story, that just about brings us up to today, except that another stray joined the household about a year ago.  Sparky is a formerly abused chihuahua who has checked into Sandra and Mom’s home for runaways and strays. Earlier this month, I was at Mom’s and brought my three dogs who always enjoy playing with Lucas and Sparky.  Pancho and Lucas enjoy an extra special bond as they are brothers and are the youngest of the pack and therefore full of energy.

While dinner was cooking Pancho made his way into the kitchen and Sandra remarked about how much he looked like Coco, his mother.  She then got sad and teary and finally confessed to me that Coco had not really gone to a friend, but rather, after being rejected by all possible adopters was turned into the East Valley Animal Shelter.  Sandra shared that that was the toughest decision of her life and it felt like abandoning a child. She had regretted it every day since. Unsaid was the implication that since Coco was not a young pup, was not cute in the classic dog sense and was also aggressive towards men that she had most likely been put down.

I felt awful for her.  It was like a scene out of “Sophie’s Choice.”  A mother figure having to choose between one of her dependents and another.  Coco or peace in Mom’s house. The fact that the choice resulted in the probable death of a beloved household member was just horrible.  The thought of poor little Coco’s fate kept haunting me. It’s a tough thing to just shake off.

Now since I was in the West Valley for the weekend I decided to check out some of my favorite Valley thrift shops on Friday.  I was quite pleased with my finds at ridiculously cheap prices and while standing in the long line to pay I heard what sounded like Pancho barking in the store.

Now, my dogs were in the car in the parking lot.  Had Pancho managed to jump out of a half open window and make it into the store?  I wouldn’t put it past him. I panicked and looked around.

Well, just off to my left I spied a woman with a white dog in her cart and two little girls petting the dog.  It kind of looked like Pancho but was it? The resemblance was uncanny. It was mostly white and had Pancho’s comical long, elf-like floppy ears, but it just wasn’t him.  Then it struck me. No…it couldn’t be…It looked just like Coco, but that was impossible.  It was just my wishful thinking.  It just couldn’t be her. Coco was… err…gone to Jesus if you will.   But, still I had to find out for sure.

As casually as I could I approached the woman and the dog and remarked how cute it was.  Without being prompted, the woman, as all dog lovers would, began to give me the full bio on her little friend.  She had rescued her (ok, my first clue-it was a female) from the East Valley Animal Shelter  (OMG, this is all lining up) and she had been dropped off after somewhat recently having puppies. Bingo!!! Ok, three out of three positive hits, but I still couldn’t be sure.  After all, I wasn’t too close to Coco for obvious reasons.  So I asked the kind lady if I could take some pictures. She seemed pleased that I thought her poochie was cute enough for photos and she happily agreed.  I didn’t dare share my suspicion with the kind lady out of fear she might whack me upside the head with a slightly used Christmas nutcracker, a one legged plastic child’s doll or bent bar-b-que implement, all which were all easily within arm’s reach, as she might think me a dognapper, extortionist or simply heartless for being complicit in dumping such a wonderful creature of God on doggie death row.

Now you think I would have run to Mom’s right away for confirmation or dismissal of my pretty good circumstantial evidence, but no.  This was a delicate matter and I didn’t want to upset either Mom or Sandra in front of the whole family.  I finally found the opportunity two days later when Sandra and I were alone in the kitchen.  I told her my thrift shop story and showed her the pictures.  She almost fainted and then began to cry while proclaiming “That’s my baby! That’s Coco!!! She’s alive!!!”  She had confirmed it by the unique markings on Coco’s nose in the photos.  As I said, Coco was almost all white but with a few unique beige markings on her nose and ear tips.  Sandra was overjoyed.  Her baby was not only alive but loved and cherished by a kind lady.

Now, as amazing and wonderful this news was I just couldn’t believe the unlikelihood of how this all went down, or came together if you will.  I mean, what are the chances that the day after Sandra confided in me her deepest secret, her “Sophie’s Choice” that had tortured her all these years, the very NEXT day circumstances would bring Coco and I together?  Like a billion to one? A trillion?

It had to be a message from God.  Or the dog gods.  Or from Coco herself.  Someone, or something, wanted Sandra to know that her baby Coco not only survived a potentially harsh fate but was fully loved and pampered.  It was truly a Christmas miracle.

Christopher James is an avid dog lover and a freelance writer for Valley News Group.